History of the national beach soccer team: there is something to remember 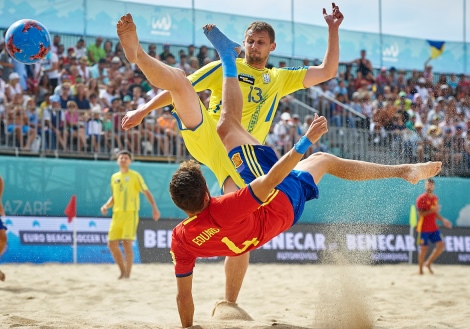 During the years of its existence, the national beach soccer team of Ukraine has won many notable victories.

On July 29, 2003, she held her first official bout of Ukraine's beach-side team. As part of the Mundialito friendly tournament, the Blue and Yellows lost to the Brazilian champions with a score of 2: 5. At the same competitions, Oleg Salenko's wards celebrated the first ever victory by shooting the United States (6: 5).

In 2004, the Ukrainians under the leadership of Viktor Moroz qualified for the finals of the Euroleague, winning Division C. In the main tournament, our team took third place, beating the reigning champion - Spain. In the semifinals, Ukraine lost to Portugal, but in the battle for bronze beat Italy.

Success at the European level allowed the team to make its debut at the 2005 World Cup. The victory over the South African team helped the blue and yellows to leave the group, but in the quarterfinals our guys were stopped by the future finalists from Portugal. As a result, at their first World Cup, our team took sixth place - the best result in history. In July of the same year, Ukraine failed to overcome the selection for Division A of the Euroleague, and a month later became fourth in the World Cup. At the end of 1, the Ukrainians won the "wooden medal" of the Moscow European Cup, losing in a duel for third place to the same Portuguese.

The following year, Ukraine overcame the Euroleague Division B and then made it to the elite. There, Vitaliy Shishova's wards took fourth place in the ranking and reached the Super Final. However, at the crucial stage in the group with Poland and Spain, blue and yellow have taken the last position on what their speech at the European Forum ended.

The following season, the Ukrainians won their first trophy, winning the 2007 European Cup in Tarragona, Spain. In the quarterfinals, our team defeated the Italians, then beat the Swiss, and in the final with a score of 3-0 dealt with the French. In the Euroleague, things were not so good - the blue and yellows could not even leave the group.

In qualifying for the 2008 World Cup under the leadership of Serhiy Kucherenko, the Ukrainians overcame the group stage, but lost to Italy in the quarterfinals. Next year, in the selection for the World Cup, our guys had the same story - a confident game in the quartet and a defeat in the 1/4 finals by the French.

Another great success came to the national teams in 2010 - the Ukrainians won the European qualification for the World Cup. The victory over Portugal (4: 2) in the final brought the blue-yellow status of European champions. However, at the World Cup itself, which took place in September 2011 in Ravenna, Italy, Kucherenko's wards took third place in the group, conceding Mexico and Brazil to the playoffs. In the Euroleague of the same year, our wife left the tournament after the first stage.

In 2012, blue and yellow became the champions of Division B in Euroleague. Before that, in May, Kucherenko's team won the home friendly of Kiev. In the qualifying tournament of the 2013 World Cup in Tahiti, Ukrainians took third place and made it to the international forum.

At the championship itself, we again failed to leave the group - according to additional indicators, Iran took the second place. Before that, the blue and yellows took the silver medal of the Kyiv Cup, and in Division A of the Euroleague they reached the Superfinal, where they took seventh place.

In the Euroleague-2014, our team again reached the decisive round of Division A, where it took sixth place. This was the last tournament of our team under the leadership of Kucherenko - in August of the same year the coach of the main beach team became its current mentor Yevhen Varenytsia. However, the change to the bridge did not help Ukraine to make its way to the 2015 World Cup - our guys in the second group stage of selection were left behind Spain.

Despite missing the mundial, 2015's blue and yellow was something to brag about. The team ranked fifth in the first ever European Games in Baku. In the Euroleague, Varenitza's players confidently reached the Super Final and became second, losing in the match for the main trophy of Portugal (4: 5).

Last year for the beach soccer team can safely be called triumphant. In the Euroleague Division A Ukraine for the first time in history has taken the highest stage, in the championship match taking revenge from the Portuguese (2: 1). However, in the selection for the World Cup in Italy, the national team could not overcome the second group stage. Also our team played in the European Cup, where in the 1/4 finals lost to Russia.

2017 began with the second place in the Persian Cup. In the Euroleague, the reigning champions went to the Super Final, but only took the seventh position. In the ranking of FIFA teams our team is 17th.