The first match in the history of the national team of Ukraine: how it was 30 years ago ... 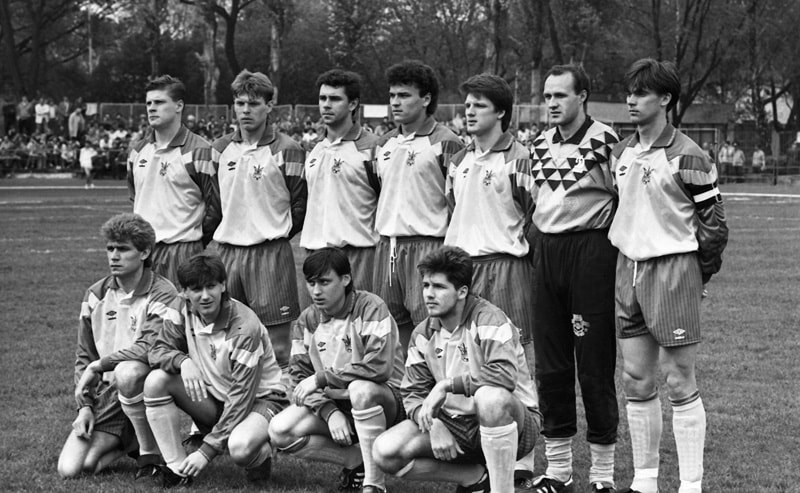 April 29, 1992. Uzhhorod. Ukraine national team before the match with Hungary. Photo by Ukrinform

On Ukrainian Football Day, we recall the premiere, which will be remembered forever. It took place after FIFA and UEFA submitted documents granting the Football Federation of Ukraine the status of a temporary member of the organization.

The choice of opponent was primarily due to geographical factors. Uzhhorod was logically chosen as the meeting place.

Lobanovskyi was meant as a coach

Due to a shortage of finances, the players from abroad were not invited. The expanded list of 41 players included Chanov, Kuznetsov, Mykhailychenko, Lytovchenko, Protasov, Zavarov, Belanov, Lyutyi, Yuran and Kanchelskis. But, without being able to pay for at least the flight of the players, no one at the FFU spoke about the topic of their call.

Valeriy Lobanovskyi, who at the time headed the UAE national team, wanted to be the head coach. Even an invitation was sent to the Emirates. But Valeriy has made it clear that he will be ready to join him only after the expiration of the current contract.

In the end, it was decided to choose a coach from among the members of the coaching staff, which included Anatoliy Puzach (Dynamo), Yevhen Kucherevskyi (Dnipro), Yevhen Lemeshko (Torpedo), Yukhym Shkolnykov (Bukovyna), Viktor Prokopenko (Chornomorets) and Valeriy Yaremchenko (Shakhtar). At the last stage, the circle was narrowed to three specialists. Puzach, Yaremchenko and Prokopenko took the team to Uzhhorod. The last of them, by agreement between the coaches themselves, took a charge.

There was no any preparation to the match. The team arrived from Kyiv to Uzhhorod, and this fact, of course, influenced the result.

Zhuk did not gave a penalty

Although before the break, at the score of 0:0, our team could score, and more than once. In the 15th minute Shelepnytskyi made a dangerous shot at Brockhauser's goal, but the visitors were saved by a post. And soon Belarusian referee Vadym Zhuk did not gave an obvious penalty for a foul against Shcherbakov.

In the second half, the Hungarian team had an advantage, given the fact of experience - the opposing players represented clubs from Italy, Spain, Netherlands, Belgium… Shaloi and Kiprich skillfully took advantage of defenders' mistakes, but Getsko, who came on as a substitute, from the penalty spot did not allow to turn the debut into a beating.

Avangard stadium was completely full that day, and the ticket for a historical match cost 50 karbovantsiv.

In the 22nd round of the English Premier League in Liverpool, an event took place...

In the match of the 22th round of the French League 2, "Bordeaux" midfielder...

Weekend for the legionnaires of the Ukrainian national team: the derby of our boys in Liverpool and the possible debut of Zabarny and Tsygankov

Club game weekend for the legionnaires of the national team of Ukraine, who caused...

In the 15th round of the UAE championship, "Al-Ain", which trains Ukrainian...