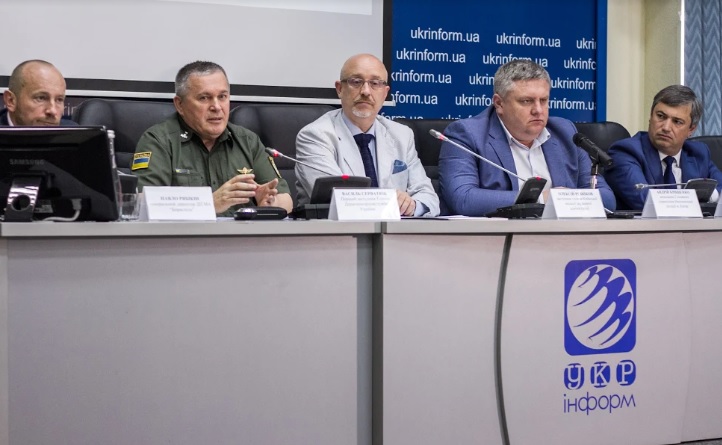 The final press conference dedicated to the UEFA Champions League finals in the capital of Ukraine took place on May 30 in Kyiv.

Representatives of the relevant services of Kyiv and Ukraine spoke about the number of visitors to the main locations of the final, the work of law enforcement agencies and doctors, and FFU officials shared plans to host another grand final in the future.

On the day of the UEFA Champions League men's final in Kyiv, Boryspil International Airport received a record number of passengers.

This was announced during a press conference by Pavlo Ryabikin, Director General of Boryspil International Airport: “On May 26, the day of the Champions League final, Boryspil received 52 passengers, which is an absolute record in the history of the airport. For comparison: during Euro 599, Boryspil received up to 2012 passengers a day. In addition, we accepted 38 flights with Real Madrid fans - 000 passengers, 31 charter flights with Liverpool fans - 6 fans, 393 business aviation flights (private jets), as well as three flights with official delegations - the King of Spain, the President Gabon and the Prime Minister of the Czech Republic. On that day, the airport earned more than 40 million hryvnias in net profit. "

The festival town was visited by 230 thousand fans

About 230 people visited Khreschatyk during the UEFA Champions League final in Kyiv. This was announced during a press conference by the Deputy Chairman of the Kyiv City State Administration Oleksiy Reznikov: “The festival town was visited by 000 people four days from its opening to closing. For example, last year in Cardiff, the "Festival of Champions" was attended by about 230 people. On Kontraktova Square, where, by the way, for the first time in the history of the Champions League finals, the match was broadcast live on the big screen, 000 fans gathered. "

According to Ryabikin, 180 hotels with 20 beds in Kyiv were completely filled. In addition, about 000 households were offered to Kyiv fans free of charge.

During the UEFA Champions League final on May 26, 32 people sought medical help, 26 of them foreigners. "The reasons for the appeals are minor injuries, namely: scratches, bruises, sprains, as well as alcohol intoxication. 18 of them were taken to hospital, all were treated on an outpatient basis, there was no hospitalization in any of the cases, "Ryabikin added. He also noted that 30 emergency medical teams were on duty at the venues and on the Kyiv-Boryspil highway.

The next morning, according to Ryabikin, thanks to the clear work of public utilities, Kyiv was cleared of garbage: By the morning of May 27, Kyiv, namely the area near the Olimpiysky National Sports Complex, two Meeting Points and Kontraktova Square, had been cleaned. Communal workers from all over the city were involved in cleaning the locations. On the night of May 27, 1 communal workers worked at the gathering. In total, the communal services of Holosiivskyi, Pecherskyi, Shevchenkivskyi and Podilskyi districts removed 400 tons of solid household waste from the fan zones and territories of "Meeting points".

In total, during the period of the Champions League final in Kyiv from May 21 to 26, Ukrainian border guards registered more than 300 foreign citizens at checkpoints. This was announced during a press conference by First Deputy Head of the State Border Guard Service of Ukraine Vasyl Servatyuk.

According to him, the registration of fans took place mainly in the capital's airports "Boryspil", which withstood the heaviest load, and "Zhulyany", where from 21 to 26 May, 15 passengers crossed the state border.

"Border guards have registered about 300 citizens arriving by road at the border with the European Union. Many Liverpool fans traveled by bus. Probably, for the first time numerous guests from those countries of the world, whose representatives very seldom visit Ukraine - for example, Ecuador, Venezuela, Colombia, Ghana, visited Servatyuk. - Some foreign citizens were unaware of Ukrainian legislation and came without visas. In each of these cases, we took responsibility and, as an exception, went to meet them with the necessary documents and return tickets. "

A fan from Norway is lost

Andriy Kryshchenko, Chief of the Main Directorate of the National Police of Kyiv, spoke about security measures during the Champions League final in Kyiv: “All work on the implementation of security measures began a year before the Champions League final. As for the numbers, 10 law enforcement officers were involved in law enforcement. 000 of them are National Guardsmen, detachments of the Ministry of Emergency Situations. Everyone worked as a team. We had constant contact with all departments. From May 4 to the morning of May 000, the police recorded 22 facts concerning the participants and fans of the finals. Of these, 27 cases were entered in the unified register of pre-trial investigations. Four of them concerned the mining of metro stations in the city center and two stadiums. There were 70 more criminal incidents - petty theft, two frauds, two cases of hooliganism. There were facts of revealing crimes on the live trail, when tickets for a match were stolen from a fan from Spain and a Briton. "

As for maintaining order at the match itself, no serious incidents were recorded at Olimpiysky. "Everything went quite smoothly," said Andriy Kryshchenko. - There were two fights between fans. Stewards and then police took out the offenders, with whom they talked outside the stadium. At the end of the match, several young men tried to fight, but police detained 18 people and took them to the district police department. "

According to Andriy Khryshchenko, the very next morning after the finale it became known that one of the fans from Norway had disappeared. He was wanted. However, the guy later found himself alive and well. He walked in the Golosiyivskyi district after the match, after which he was received by one of the Kiev residents. Recovering after a stormy evening, the Norwegian arrived at his hotel, and then went home.

Summing up, FFU First Vice-President Vadym Kostyuchenko said at a press conference that the federation had received an official letter from UEFA President Alexander Cheferin, thanking the Ukrainian side for the quality organization of the Champions League finals.

"Taking this opportunity, on behalf of FFU President Andriy Pavelko, I would like to thank Igor Rainin, Chairman of the National Organizing Committee of the Champions League Finals in Kyiv, and Vitaliy Klychko, Chairman of the City Committee," said Vadym Kostyuchenko. - Thanks to them, we all united around football and did a lot of work to organize such a big football holiday in the capital of Ukraine. Several football records will remain in the history of Kyiv and in the history of this final. Real Madrid have won the Champions Cup three times in a row, and coach Zinedine Zidane has won the final three times in a row. That is why our final is already historic for the European football community. "

According to Kostyuchenko, the match in Kyiv was shown in more than 200 countries and territories with an audience of about 350 million spectators. Also before the final there was a friendly match between representatives of Ukrainian and British media, which ended with a score of 7: 2 in favor of the Ukrainian team. And after the final, representatives of the local organizing committee played with the UEFA team at the NSC "Olympic". In this match the friendship won - 3: 3.

"Speaking about the finals of the Champions League in Kyiv, we can not ignore the decisive match of women's teams, which gathered a full stadium of fans. Players of all our national teams were present at this match. I am sure that this event will also add popularity to women's football, - said Vadym Kostyuchenko. - The same applies to the "Festival of Champions", which took place on Khreshchatyk. There, 200 of our young football players received balls and football equipment from the ambassadors of the final, from the mayor of our city. "

As for the numbers of the final between "Real" and "Liverpool", the "Olympic" on May 26 employed about 1 stewards, trained with the best European experts and UEFA coaches in these areas. 000 volunteers worked at stadiums, "Festival of Champions", at airports. "With all this powerful team, we can optimistically prepare for the next big competition. Therefore, our next step will be Ukraine's bid to host the Europa League final or a match for the UEFA Super Cup in the capital in 507. It is not necessary to speak about our chances for these fights now. But today a working group has been set up to work out all the materials, and according to the mechanism available at UEFA, all the necessary documents will be submitted in the near future for Ukraine to take part in the competition for this right, ”Vadym Kostyuchenko added.

The past year has left a noticeable mark in the history of Ukrainian football. IN...

May 30 will host a press conference "Champions League Final in Kiev: results"

On May 26 at the "Festival of Champions" in Kyiv non-stop lasted ...

"Festival of Champions" in the center of Kiev began its work!