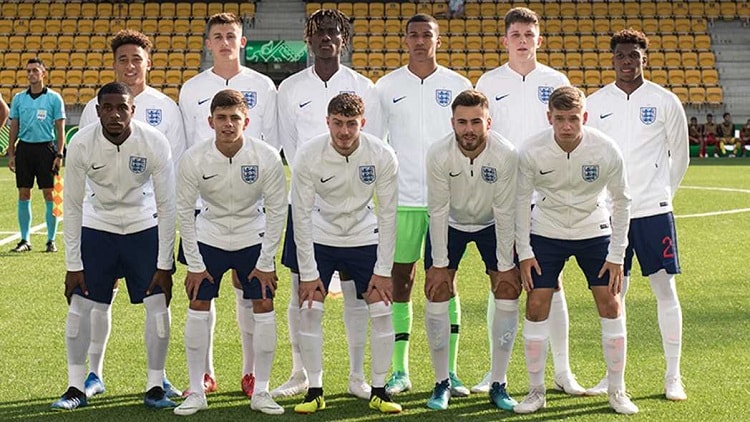 The England national team is the current European champion in the U-19 age category, and also the continental record holder in the number of titles.

The British young men accumulated 10 - as many as in Spain. And in general, in recent years, England at the youth and youth levels is very strong. This testifies to the very great potential, as well as to the work that has been done in the youth football of this country.

Stars in and out of stock

But it was these successes that led to the fact that the England U-19 team arrived at the current European Championship without a large group of top players born in 1999-2000. After all, clubs are counting very seriously on the most promising performers of such a powerful galaxy. And in them the question of preparation for a season is actual.

Eight English players born in 1999-2000, who are valued at more than a million euros by the authoritative Transfermarkt portal, did not qualify for Euro 2018 (U-19). Fulham's 18-year-old left-back midfielder Ryan Session is currently the most valuable, with € 25 million estimated by Transfermarkt experts. He has already played for the England youth team, scoring 23 goals in 82 games for the club's squad, at the U-19 level, apparently, he has nothing to prove. After all, he won the Euro-2017 U-19. Although in this selection he still managed to play two games.

Borussia Dortmund is joined by his peer winger Jedon Sancho, for whom the German club gave Manchester City 7,84 million euros last summer. Transfermarkt estimates him even higher - 15 million. Sancho has already played 12 matches in the Bundesliga and scored a goal. In the selection of Euro 2018, he scored two goals in five matches.

Another player born in 2000 - central midfielder Phil Foden from Manchester City - has even made his debut in the Champions League. Our competitor Oleksandr Zinchenko's Transfermarkt estimates at 7 million euros.

Due to the lack of such a group of experienced performers, the England national team can be considered weakened. Transfermarkt singles out Paul Simpson's team with only one player who has a price in the transfer market - the striker Brereton from Nottingham Forest. He has already played 57 matches for the club in the Championship (the second division of English football) and cup tournaments, scoring nine goals.

The rest of the players are just beginning to approach the main lineups of their clubs. Some played in the lower divisions, some in the FA Cup and League Cup. These are defender Sterling (Coventry), midfielders Ambleton (Sunderland), Tavernier (Middlesbrough), Bayliss (Coventry), forwards Hearst (he currently represents Belgian "Aud-Heverle"), Morris (I ) and Ennis (Wolverhampton).

Experience of European and World Championships

Despite the huge number of medals won in 2016-2018 by various England national teams at the youth and youth levels in Europe and the world, under the leadership of Paul Simpson, few players with experience in such tournaments. Most of those players are preparing for the season in their clubs.

Although there is still someone to pass on the winning experience. The current England U-19 team includes three European champions in 2017. These are defenders Chaloba and Sterling, plus forward Brereton, who scored three goals in the final tournament a year ago. He brought victory in the group over the Netherlands (1: 0) and scored the first two goals against Germany (4: 1).

The 2017 U-17 world champions are Kirby and Gallagher midfielders. They did not score goals, but Kirby scored a penalty in the post-match series in the 1/8 finals with Japan.

True, they did not win silver at the European Championships that year in the same category. And in general, the Simpson team does not have any of those vice-champions.

But the participants of Euro 2016 (U-17), in which England lost to Spain in the quarterfinals (0: 1), can play with Ukraine. There are five of them - defenders Sterling, Chaloba and Francis, forwards Morris and Hearst. Both strikers in that tournament scored in the group: Morris - the second goal of France (2: 0), Hearst - the third of Denmark (3: 1).

The England national team did not have any problems in the first stage of qualifying for Euro 2018 - three victories in three matches in Bulgaria with a total score of 9: 1. Nketia from Arsenal, who is not in the application for the final tournament, scored more than half of the goals (five). He put four in the Faroe Islands - 6: 0 (once again scored by Ambleton and Brereton), one - Iceland - 2: 1 (plus a goal by Mount Derby County, which is also not in the application). The hosts of the tournament managed to win with a score of 1: 0 thanks to the blow of 18-year-old prodigy Sancho, who remained in the camp of "Borussia" from Dortmund.

In order to get to the first basket in the draw of the elite round, Paul Simpson's wards lacked literally one effective shot - they were in the second basket on the first step (Ukraine, by the way, on the third). However, England was lucky - from the first basket they got not Germany or Spain, but Macedonia.

And the group turned out to be simple - also Latvia and Hungary. The British defeated the Hungarians in the first round - 4: 1 (Mount, Nelson's double, Sancho - none of them are currently in the squad for Euro 2018), the Latvians in the second - 3: 0 (Mount, Nketia and Hearst - only the latter can play today against Ukraine). And the task of reaching the final tournament was solved in advance. Therefore, in the last round, the British made a gift to the hosts of the tournament - the Macedonians, who did not have a single point, and lost to the Balkans - 0: 2.

How they started at the European Championship

In the first round, the British defeated Turkey - 3: 2. Already in the 2nd minute the Turks scored their goal, but before the break England played back and took the lead in the score - 2: 1. Tangang's central defender scored in the 22nd minute, and right winger Brereton scored in the 45th + 2nd minute. In both cases, the central midfielder Ambleton acted as an assistant. He scored the third goal after the break (54th minute). On the 57th the Turks reduced the gap in the score, but there were no more goals.