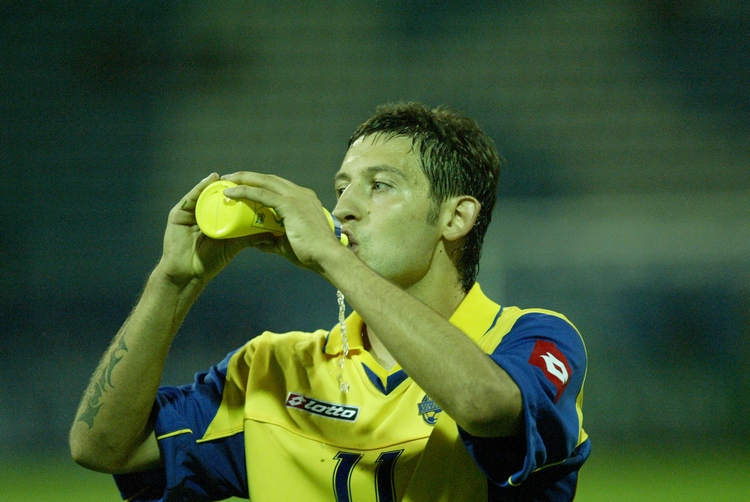 Six years after winning bronze medals at Euro 1994 (U-16) Ukrainian football has again received international recognition. This time - in the older age category, U-18. Although it would be fairer to call it U-19, because some players were already 19 years old at the time of the final tournament. Subsequently, by the way, UEFA made adjustments to the names of categories, making them more relevant to reality.

Anatoliy Buznik began to take care of the generation of football players born in 1981. Under his leadership, the boys made their way to the final tournament of Euro-1998 (U-16), where they scored four points in three matches and did not leave the group. But they gained some experience that came in handy in the future.

The Euro 2000 (U-18) qualifying tournament consisted of two stages. The first took place in Ploiesti, Romania, where the hosts and the Ukrainian national team scored an equal number of points - five each. In the last match, the rivals met each other and drew (0: 0), which brought Ukraine first place and a pass to the next round. Before that, Anatoliy Kroshchenko's wards defeated Bulgaria, which included the future scorer Dimitar Berbatov, with a score of 4: 0 and shared the points with the team of Bosnia and Herzegovina - 1: 1. Goals were scored by Andriy Matveev (2), Ruslan Valeev, Volodymyr Bondarenko and Bohdan Shershun.

The matches of the second stage - in the playoff format - took place in the spring of 2000. In Kyiv, the Ukrainians defeated the national team of Northern Ireland with a minimum score of 1: 0, in Belfast in the 4th minute the hosts restored the balance, and the fate of the confrontation was decided at the end of the match: 83rd minute - 1: 1, 87th - 2: 1, 89-a - 2: 2.

The hero of these two matches was Oleksiy Belik, whose star was going to Shakhtar at the time. He scored all three goals for the British, and scored in the final tournament. Probably, he was not enough for the team in the decisive match with the French team, because the main scorer of the Ukrainians earned disqualification due to an extra yellow card.

However, the silver medals of the European Championship turned out to be the most serious achievement for Ukrainian football at that time. The performers quickly became famous, they were closely watched and expected that in the future most of them will become the main players of the national team.

And the main star of Ukraine, born in 1981, was Ruslan Rotan, who played a total of 100 matches for the national team and scored eight goals (2003-2018). However, he did not have a stable place in Kroshchenko's team. Serhiy Symonenko (two matches in the national team), who took part in other matches against Kroschenko, including the first stage of the Euro-2000 selection, also did not make it to the finals of Euro-2000.

But Ruslan Bidnenko, Serhiy Danilovsky and Taras Kabanov (all - one match in the national team) in 2000 were not invited to the youth team. Bidnenko played until 1999 inclusive, and Danilovsky and Kabanov started playing only in 2001.

We will also note the players who helped the national team of Ukraine to make it to the final tournament of Euro-2000. In addition to Symonenko, who then represented the Moscow "Torpedo", at the first stage of selection are Alexander Batrachenko ("Metallurg" Zaporozhye), Pavlo Katkov ("Kryvbas" Kryvyi Rih), Mykola Nakonechny ("Borisfen" Boryspil) and Volodymyr Petrovsky ("Dynamo") Kiev). Serhiy Levchenko (Borussia Monchengladbach), Ruslan Rotan (Dnipro Dnipropetrovsk), Andriy Smalko (Borisfen Boryspil) and Serhiy Histev (Stal Alchevsk) also played in the second stage.

It should be noted that the future players of the national teams of their countries also played in the teams of our rivals. For example, Hanno Balic and Benjamin Laut (Germany), Dario Srna, Marko Babic, Nikola Safaric, Marian Bulyat, Dino Drpic (Croatia), Rafael van der Vaart (Netherlands). The Dutchman Saeed Butahar later played for the national team of Morocco. The Czech team was represented by Petr Cech, Milan Baros, Tomas Hubschman and David Lafata. And under the leadership of coach Jacques Crevoisier, the European champions were the future players of the French national team - Jibril Cissé (41 matches, nine goals), Philippe Mexès (29, 1), Gael Given (12) and Bernard Mendy (3). Some of them have become international stars.

U-18: the youth national team of Ukraine will take part in the traditional Stevan Vilotych Tournament

At the end of this year, Serhiy Nagornyak's wards will take part in ...

Euro-2022 (U-19): qualifying tournament with the participation of the youth national team of Ukraine will take place in Poland

The date and place of the tournament in the qualifying round are known ...