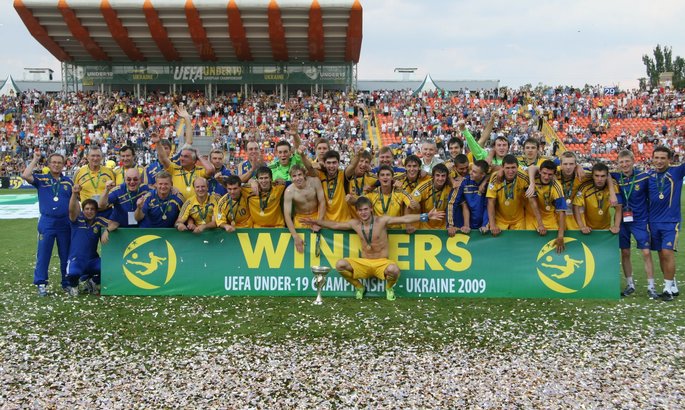 In 2009, Ukrainian football won the first ever gold medals. Even at the level of U-19 teams, but Ukraine became the European champion. And all this could not have been, if not for the character, which was shown by the wards of Yurii Kalitvintsev in the final match of the group tournament with the team of Switzerland on RSC Olimpiyskyi in Donetsk.

And at home Euro-2009 (U-19) Ukrainian team was expected to at least reach the semi-finals. Kalitvintsev himself told about it before the start of the European Championship.

There were no quick changes in the quality of the results after the change of coach. He had little time for preparatory work ...

At first it was impossible to squeeze Slovenia, who remained ten players on the pitch for the last quarter of an hour of playing time, then there was a goalscoring draw with England. In addition, Serhii Lyulka and Vitalii Vitsenets were injured in the game against the Balkans, but the regulation allowed for their replacement - for Serhii Loginov and Yevhen Shakhov.

Everything had to be decided in the last round, before which the tournament situation looked like this: Switzerland - 4, England - 2, Ukraine - 2, Slovenia - 1. Given the very likely victory of England over Slovenia (as a result, it happened - 7: 1 ), all they had to do was defeat Switzerland. But in the last minute of the first half, Ukraine was left in the minority - due to the red card to Vitalii Kaverin, who, having already been warned, had the ball thrown away ...

It seemed to be the finish. But with the pressure of the opponent, Kalitvintsev's team answered in the 85th minute with effective pressure at the opponent's goal: Serhiy Shevchuk fired from the right wing under pressure from three opponents, and Serhiy Rybalka on the second attempt pushed the ball into the net. The victory is 1-0, and Ukraine, together with England, reaches the semifinals, and shocked Switzerland goes home.

After that, the Ukrainians broke through and Denys Garmash became the hero of these matches. At first he scored twice in the match with Serbia (a quick goal by Yevgeny Shakhov added confidence and marked the beginning of the victory), and in the final he scored a magnificent goal after a corner kick, after which he carried out a solo raid and earned a free kick, which was completed by a wonderful shot by Dmitry Korki.

It is clear that a lot was expected from the generation of European champions in Ukraine. But some did not even have time to play at the top level in the Ukrainian championship. The best player of Euro-2019 (U-19) Kirill Petrov did not get to the national team. In general, there were only five of them - Bohdan Butko (33 matches), Denis Garmash (30/2), Serhiy Kryvtsov (16), Serhiy Rybalka (9) and Yevhen Shakhov (7/1). Not a very high figure, as for champions. Currently, only Kryvtsov and Shakhov have a place in the national team.

There were also future stars in other teams.

Today, November 17, in a match against Kosovo, the U-19 youth national team of Ukraine...