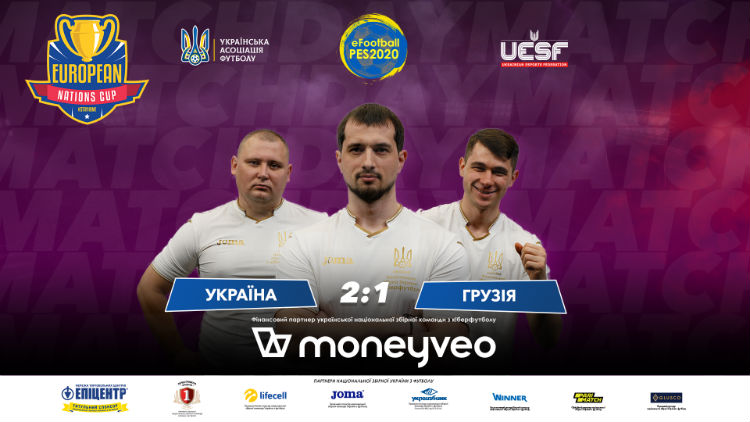 In the second match of the online competition #StayHome European Nations Cup, the national team of Ukraine in cyber football in the discipline of PES defeated Georgia in a difficult fight.

Teams from 12 countries are taking part in the tournament, which was organized by the Federation of E-Sports of Ukraine together with the European E-Sports Federation. It takes place in three disciplines - CS: GO, League of Legends and Pro Evolution Soccer (PES).

The national cyber football team of Ukraine in the PES discipline is represented at these competitions by three players - Vitaliy Budb_proshe Litvinov, Maksym Makson Andrasyuk and Ihor Ighor_8 Lyubchak.

Today, Ukraine was opposed by Georgia. Igor Ighor_8 Lyubchak played for the blue and yellows. The duel was to last up to two victories, and it took three matches to determine the winner.

Despite the great advantage of Lyubchak in the first game and a significant number of dangerous moments, our opponent turned the match into overtime. There he used the only successful counterattack and won 1-0.

In the second match, Igor finally played for real and won the first half - 2: 0. After the break, the players upset each other twice, and the Ukrainian won - 4: 2. Thus, the score in the confrontation was equal - 1: 1.

In the decisive match, the main time ended in a draw - 2: 2. Only in the second overtime, the Ukrainian gamer was able to snatch victory in the match - 3: 2, and hence in the whole confrontation with Georgia.

After this victory, the national team of Ukraine scored six points in Group 1. In the second match of our quartet, Serbia and Azerbaijan meet today. The Serbs currently have three points, the Azerbaijanis have none.

It should be be recalled that in the group round, Ukrainian cyber football players play three series, each of which lasts up to two victories (a total of six to nine games can be played). Participants are awarded three points for winning the series, and zero for losing.

The two best teams from each group and two best third-placed teams, will qualify for the playoff round. In the future, the teams will compete in the relegation series to two victories, and the final challenge will last up to three victories.

The national team of Ukraine will hold the next series on the virtual football fields of PES on Wednesday, May 27 with the team of Serbia (starting - at 19.00). This match will end the group stage of the tournament.