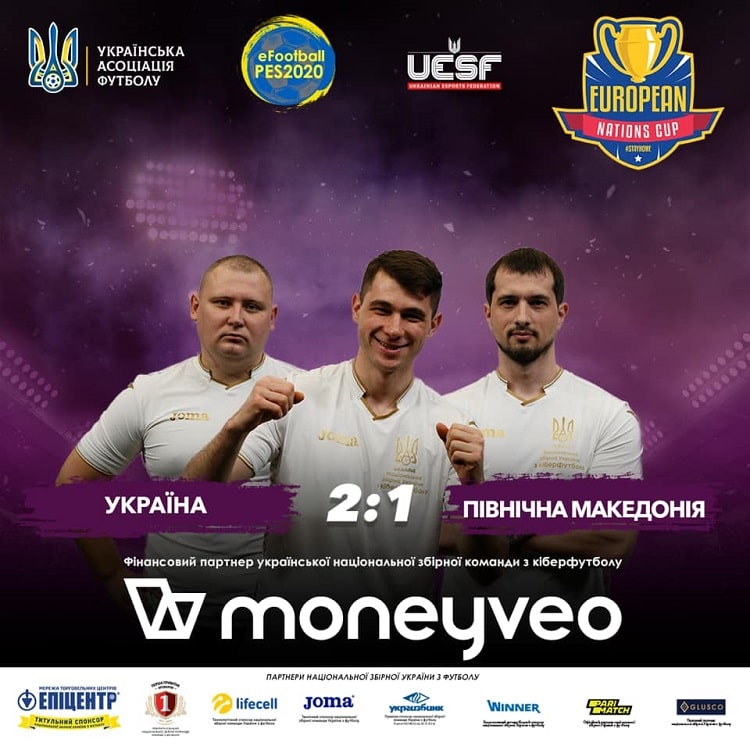 In the match of the 1/4 tournament of the European Nations Cup, the national team of Ukraine in cyber football in the discipline PES met with the team of Northern Macedonia. Like the Ukrainians, the Macedonians finished second in their group in the quartet.

According to the rules of the tournament, rivals can play both national teams and football clubs. In the final match, both the blue and yellows and their opponents played top FC, which only added to the confrontation of intrigue. The honor of the national team of Ukraine was defended by Ihor Ighor_8 Lyubchak and Maksym Makson Andrasyuk. The gamers were represented by DGarevski21.

In the first match, both Igor Lyubchak and the Macedonian player chose Turin's Juventus as their club. Unfortunately, DGarevski21's Stara Signora proved to be unquestionably stronger. The advantage of the Macedonian during the game was not in doubt, and the final result of the confrontation, 9: 4 in his favor, is therefore a testimony.

In the second match of "Juventus" DGarevski21 faced "Bayern" from Maxim Andrasyuk. Here the scenario of the match was diametrically opposed. Our gamer immediately took the initiative and, even despite the missed ball, scored three times in the first half in the opponent's goal. In the second half of the game Makson scored two more goals and celebrated the victory - 5: 2. Thus, the total score in the series to two victories was 1: 1.

As expected, Maxim Andrasyuk's Bayern and DGarevski21 met Juventus again in the decisive match. The real intrigue here persisted only until the break. Makson scored two goals at the beginning of the game, but the opponent managed to restore the balance - 2: 2. But the second half passed with the full advantage of Maxim Andrasyuk. Our player carried out five effective attacks, and his opponent - none. As a result - 7: 2 in this match and 2: 1 in the confrontation in favor of our team.

Thus, the national team of Ukraine reached the semifinals of the online tournament European Nations Cup. There, her opponent will be Portugal, which defeated Belgium (2: 1).

It will be recalled that the #StayHome European Nations Cup tournament is held under the auspices of the Ukrainian Football Association at the initiative of the Federation of E-Sports of Ukraine and the European E-Sports Federation. Teams from 12 countries take part in it. Competitions take place in three disciplines - CS: GO, League of Legends and Pro Evolution Soccer (PES).