First League. The victorious march of "Agribusiness" and another sensation from "Flint" 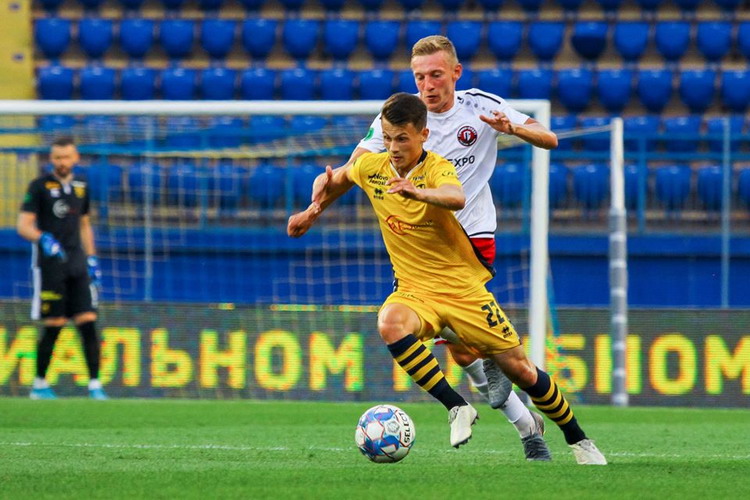 The third victory in a row, this time over "Miner-Sport", allowed "Metalist 1925" to gain a foothold in the leading group. Photo by FC Metalist 1925

Footballers of Kharkiv "Metalist 1925" made the most of the fact that after the restart of the first league championship they got rivals who are not in the top group.

But the third victory in a row was given to Andriy Demchenko's wards in a fierce struggle. The first half of Slobozhany's confrontation with Girnyk-Sport was especially full of interesting events: the ball hit the goal three times, there were still half a dozen unrealized goal moments, and the defender of the guests Semyon Dyachenko was sent off for a foul of last hope.

However, even playing in the minority, Igor Zhabchenko's wards tried to respond to every attack of the hosts with a dangerous counterattack. Suffice it to say that in overtime only the excellent reaction of Kharkiv goalkeeper Denis Sidorenko saved the hosts from trouble when he won a duel with Ilya Malyshkin.

"At first, everything turned out very well for us," said Andriy Demchenko, the leader of Kharkiv, after the final whistle. - They scored a fast ball, later they found themselves in the majority. But we didn't realize a few goal moments, and the guests almost punished us for such carelessness. There were two different halves: in the first we dictated the conditions, and after the break the players from Horishni Plavni acted better… »

Again, an unexpected result was recorded in Kremenchug. It will be recalled that immediately after the restart, Kremen's footballers inflicted a sensational defeat on the semifinalist of the Ukrainian Cup - "I pass", and in the current round they almost forced the ambitious "Volyn" to capitulate. At the beginning of the second half, Dmytro Sula skillfully scored from the penalty spot over the wall and opened the score. The guests escaped defeat only in overtime, when Denis Kozhanov converted a penalty. This is his 14th goal in the championship, and he is only one shot away to the leader among the scorers - Nice Sitchinavi from "Ingulets", who once excelled in a winning match with "Vanguard".

And finally - about the postponed match of the 20th round between "Rukh" and "Agribusiness", which took place today. Already in his debut, Yuri Kopyna, after a corner kick, won a horse duel and brought Rukh forward. In the 28th minute, Mykola Kohut from outside the penalty area scored under the crossbar and equalized. But in the next attack of Lviv Ivan Bruckner dared to shoot from afar, forcing the visiting goalkeeper Andriy Artym to make a mistake. Bohdan Semenets could soon equalize the score, but managed to make a mistake at close range.

Interestingly, the events unfolded after the break. In the 63rd minute Bohdan Semenets managed to rehabilitate - 2: 2, and in seven minutes Ivan Kohut, following the example of his twin brother, once again forced the capitulator of the hosts Oleksandr Bandura. Podolia wins for the sixth time in a row, and now they are leading the standings.

According to the decision of the SCC UAF from 08.08.2019, FC "Avangard" Kramatorsk is credited with a technical defeat (0: 3) for entering the field of a player not included in the referee's report for the match, and the team "Prykarpattya" Ivano-Frankivsk - a technical victory (3 : 0).