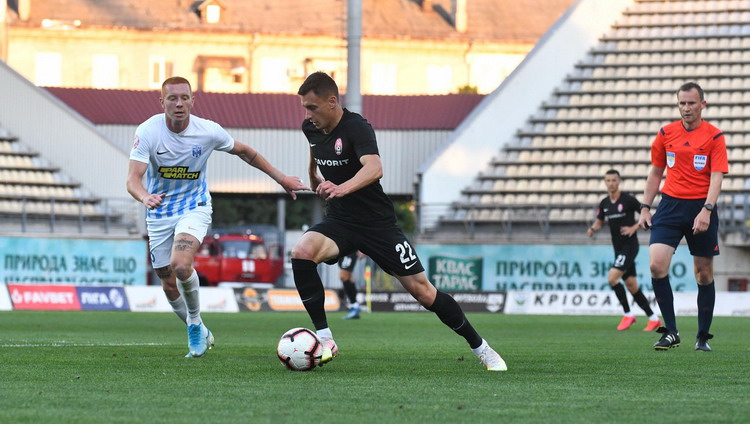 In the final, 32nd round of the Premier League, the winner of the meeting between Zorya and Desna secured third place and a direct pass to the Europa League group stage.

Moreover, Luhansk was satisfied with the draw, and in case of Dynamo's defeat by Kolos, Viktor Skrypnyk's team could even count on silver in case of their victory. But Chernihiv did not agree to the role of extras and even won the first half. After receiving a transfer from the U-20 world champion Konopli, the account was opened by ex-player of "Zorya" Budkivsky.

Shortly after the break, Khomchenovsky turned the ball into the top corner of the goal with a great long-range shot, restoring balance. Another goal could bring "Zorya" the final second place, but Luhansk failed to score it. 1: 1.

Dynamo, which met Kolos at the Olimpiysky National Sports Complex, did not lose enough to finish second and win a ticket to the Champions League qualifiers. But this task turned out to be difficult for Kyiv, despite the fact that they had won the previous three matches with the Blacksmiths.

After the blows of Buyalsky and Rusyn, the ball hit the frame of the goal, and in the end the nominal hosts were the first to make an effective shot. After Morozko's canopy, Lysenko beat the white-and-blue defenders in the air and hit the goal of his former team with a header. And then Shaparenko fouled against Wilhamsson in his own penalty area, and the Icelander himself realized the 11-meter.

As part of Dynamo, the players of the national team of Ukraine took part in the game: Shabanov, Karavaev, Shepelev, Tsygankov, Buyalsky.

The result of the match between Oleksandriya and Shakhtar, which won gold medals in advance, could no longer affect the tournament standings of the teams. The Pitmen, as in previous matches, used an experimental team. Solomon first made a goal pass to Tete, and then scored a direct free kick. At the end of the game the hosts played two goals - 2: 2.

As part of the Orange and Blacks, the players of the national team of Ukraine came on the field: Bolbat (replaced in the 64th minute), Matvienko. For "Alexandria" the whole match was played by the reserve goalkeeper of the blue-yellow Panks.

The tournament ended among the teams that competed for 7th-12th places, although in it because of exclusion from the competitions of Lviv "Carpathians" and not all matches were played. Today, Dnipro-1 defeated Vorskla, which finished the season with the youth team, 3-0. In another match, Mariupol beat Lviv 2-0 away. In both of these matches, the players who last year won the U-20 World Cup in Poland as part of the Ukrainian national team scored goals. Dnipro-1 striker Supryaga has a double, and Mariupol midfielder Cech scored his debut goal in the Premier League.

In the UPL championship of the 2019/2020 season, it remains to play the last ticket to the Europa League, the owner of which will be determined in playoffs with the participation of "Alexandria", "Kolos", "Dnipro-1" and "Mariupol".

"Olympic" - "Carpathians" - did not take place

Officials Appointed for Matchday 11 of the Premier League (updated)