Today there were four matches of the 5th round of the UPL, which became the last before the break in the match of the national teams.

In parallel, two matches were held with the participation of clubs that will represent the country in the group tournament of the Champions League. Both Shakhtar and Dynamo drew their matches, and both grands had to win back.

The Pitmen gave the worst start to the championship since 2008 this fall. Their manager Luis Castro after the game in Chernihiv explained this by the lack of a break after the previous season, which stretched for the Orange and Blacks due to participation in the Europa League playoffs, where they reached the semifinals.

Today, Shakhtar created a quick goal thanks to Kovalenko's successful actions after a corner kick. Victor was on time after a blocked strike by Moraes. "Desna" equalized the score and took the lead thanks to two goal passes by Gutsulyak - to Mostovy and ex-miner Totovytsky. In both episodes, the defenders of the guests acted inertly, forgetting about the insurance and losing the authors of the goals.

But the champion still escaped defeat. Substitutions from Luis Castro worked. A small miracle was created by two Brazilian jokers - Tete and Dentinho, and the author of the goal appeared on the field for the first time this season, and he scored for the last time more than a year ago. 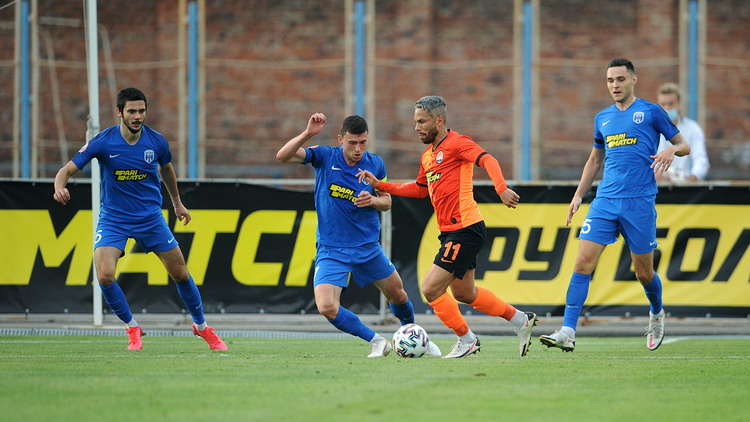 Dynamo, on the other hand, is showing progress compared to previous years at the start of the championship. Kyiv, even after losing points in the meeting with Zorya, topped the table, beating Vorskla by additional indicators. In the first half, both opponents were not very active, but after the break the game revived, and moments already appeared at the gates of both teams. Kochergin scored from a long distance, and in this episode Bushchan did not do without error. Dynamo came back after De Pena found a pass from Verbych, who turned perfectly with the ball and beat Zorya goalkeeper Shevchenko.

As part of Dynamo, the blue-and-yellow players called up for the next training camp: Bushchan, Mykolenko, Karavaev (replaced in the 69th minute), Zabarny, Sidorchuk (yellow card), Tsygankov (came on as a substitute in the 59th minute) ), Shaparenko.

Another interesting match took place in the capital. At the stadium. Valery Lobanovskyi "Olympic" and "Alexandria" jointly created five goals. The hosts had to look fresher because, unlike the opponent, they did not take part in the matches third round of the Cup of Ukraine. Perhaps this helped them to realize their advantage in the first half in three goals scored. In addition, Banada was confiscated from the guests.

But after the break, the players of "Alexandria", even acting in the minority, added in speed and reduced the gap to a minimum - 3: 2. However, they did not have enough time to achieve more.

In the last match of the round, Kolos minimally beat Mariupol thanks to an 11-meter penalty in the last minute and climbed to third place.