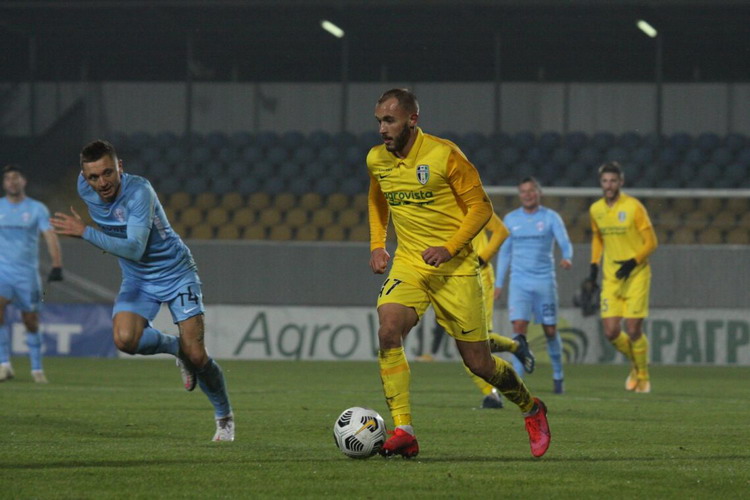 Roman Vantukh opened the scoring in a cup match with Minai. Photo by FC "Alexandria"

In the fight for a place in the quarterfinals Cup of Ukraine the draw brought together two representatives of the elite division - "Alexandria" and "Minay". It turned out to be stronger team from Kirovograd, and it all started with a goal scored by the hosts Roman Roman Vantukh.

"The score of 3-0 should not be misleading," said Oleksandriya player Roman Vantukh in a comment to the official UAF website. - After all, after I scored in my debut, the Transcarpathians had a great opportunity to restore parity, but they were wrong. This was my first goal for Alexandria, and I am glad that everything ended so well for us. By the way, with "Minai" I did not act in defense, but on the left flank of the attack. On the eve of the match, head coach Volodymyr Sharan asked if I could close this position. I answered in the affirmative, because in my previous team, Olympic, I played in the front line several times. I was satisfied with my actions in the match with Minai, although it is difficult to say where I will play in the future. After all, the main thing is to benefit your club.

Of course, it is nice that "Alexandria" has made it to the quarterfinals, because through the cup tournament you can get the right to play in the international arena. We really want that! For "Alexandria" I will play on lease until the end of the season. So far, everything suits me here - both in terms of games and in everyday life. The recent victories of the youth national team of Ukraine in the selection of the European Championship added confidence. This is a very valuable experience, it's just a pity that due to age I will no longer be able to help the "youth".

Cup of Ukraine: representation of divisions in the 1/4 finals throughout the history of the tournament

To the quarterfinals of the National Cup ...

Ukrainian Cup. Ruslan Kostyshyn: It doesn't matter who you play with, if the goal is to win a trophy!

The head coach of Kovalevsky & la ...

Ukrainian Cup. Artem Dovbyk: We will try to take the opportunity getting revenge to Oleksandriya

Cup of Ukraine. Oleksandr Chyzhevskyi: "I don't think Shakhtar will underestimate us, but one of the advantages of Agribusiness players may be looseness"