Vadym Kostyuchenko: "In this difficult time we managed to keep the ship of children's and youth football afloat" 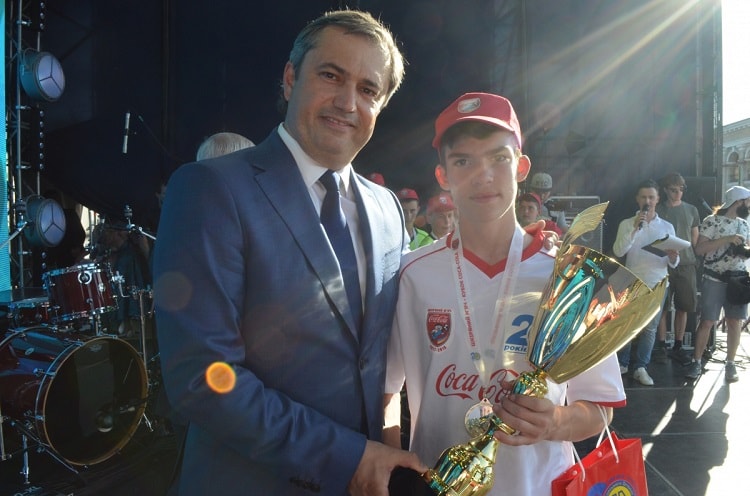 The first vice-president of the Ukrainian Football Association Vadym Kostyuchenko summed up the results of the past year in the field of children's and youth football, which is a priority of the UAF.

- Vadim Konstantinovich, 2020 is coming to an end. What achievements in the children's and youth football sector can UAF boast?

- First of all, I must say that the year was very difficult and difficult in terms of the development of the most popular direction of Ukrainian football, namely - children's and youth. Measures to prevent the spread of the disease caused by COVID-19 had a huge impact on the above area. UAF had two ways to work in this sector: the first - to stop all competitions, both at the national level and directly in all regions, the second - to analyze the complexity of the situation, to systematize all available information, to consult with public authorities, to work certain protocols and to continue the development of children's and youth football.

And if the second part of the 2019-2020 season we had to stop, in connection with which for the first time in the history of the championship of Ukraine among the teams of children's and youth sports institutions no champion team was found, then the first round of the 2020/2021 season we carried out very organized and in compliance with all the requirements of current legislation on quarantine measures.

- Thanks to whom, in your opinion, did you manage to do all the work on the organization of the children's and youth sector and keep the system of competitions in Ukraine among these teams?

- I am sure that the main actor in the development of children's and youth football is the president of DUFLU Vitaliy Bort. He and his team of specialists have made every effort to ensure that this area of ​​work has serious positive achievements, as the future of Ukrainian football is based on this foundation. It is thanks to his strong, well-founded and very constructive position that the ship of youth football managed to stay afloat at this difficult time.

The staff of the DUFLU Directorate together with the UAF Children's and Youth Football Committee, headed by Andriy Prokhorovych, held a large number of very important events, ensuring the start of the new Ukrainian Football Championship among the teams of children's and youth sports institutions in the 2020/2021 season. I would also like to note that the competition system was reformed in DUFLU. This season, after all, the Elite League was created, which has been talked about for more than three years.

Yes, one of the skeptics may point out that the system that the teams are currently playing is not the most optimal, but the reform has been done. The participants of the Elite League included the most powerful children's academies of Ukraine, there were much fewer passing matches, which strongly encourages potential partners to join these competitions. The obligatory organization of live broadcasts from the matches of the Elite League teams is another achievement in the work of the children's and youth football sector. This is exactly the norm prescribed this season in the relevant regulations, and, to the credit of both the organizers of the competition and the football teams themselves, it is fulfilled almost one hundred percent.

So, already this season, all fans of children's and youth teams of the Elite League, and many of them, had a great opportunity to watch the matches of your favorite teams on the YouTube channel online. This option has come in handy due to the introduction of restrictions on the presence of spectators at sports facilities during football matches.

- What are UAF's plans in this direction for the next calendar year?

- The Ukrainian Football Association will continue to actively cooperate with DUFLU in the development and promotion of this extremely important and incredibly interesting area of ​​football. It is planned to continue the implementation of measures to train coaches of children's and youth football, which was launched last year. Thanks to the UAF Football Institute and the National University of Physical Education and Sports of Ukraine, we have introduced free online courses under the UAF D-diploma curriculum and in 2020 attracted about 500 people from different regions of Ukraine.

It is the development of the latest technologies, thanks to which the UAF can implement such measures, has become one of the few, given the quarantine restrictions, positive aspects. Next year, we will continue such courses and attract as many people interested in the learning process as possible, who, after receiving the relevant diplomas and licenses, will be able to train with young football players from the initial training groups.

Therefore, we have big plans for the development of children's and youth football, and for their implementation the UAF leadership will not stop at any challenges. Our team of specialists will always find opportunities for development to be constant and harmonious, no matter what.

DUFLU: The first part of the tournament in the Elite League of the 2020/2021 season has been completed

In the championship of Ukraine among the participants of the DUFL Elite League the first ...

Vadim Kostyuchenko: "DUFLU, together with the FFU, will continue to work on the implementation of already developed projects - such as, for example, the creation of the Elite League"

FFU First Vice President Vadym Kostyuchenko summed up the results of 2018 in ...