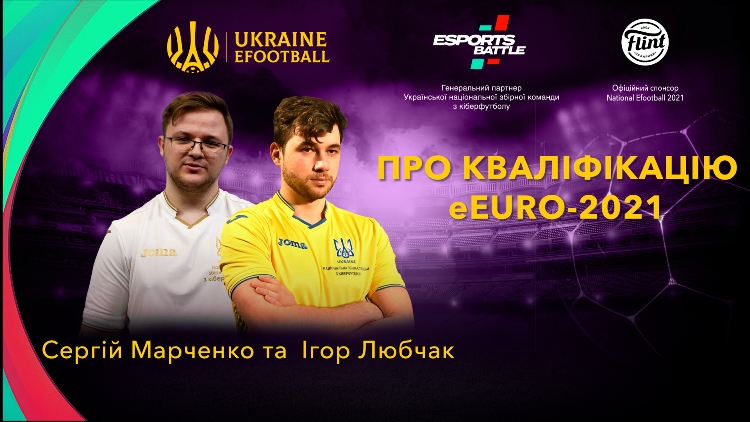 Players of the national team of Ukraine on cyber football Serhiy Sergobibika Marchenko and Igor Ighor_8 Lyubchak shared their impressions from the performances during the second game day of the UEFA eEuro-2021 qualification.

The Ukrainian team defended the second place in the table from the encroachments of Northern Macedonia, but failed to change the tournament situation in the game series with the Spaniards, who eventually won Group A. Following four confrontations, the Ukrainians finished second with 15 points and will take part in May. play-off of the European championship.

"We started from the tournament position, which was in our favor, if we do not take into account the Spanish national team," said Igor Ighor_8 Lyubchak about the goals and objectives facing the Ukrainian team during the second day of selection. - That is why it was critical for us to defend the second place in the matches with the national team of Northern Macedonia. We coped with this task. As for the games with Spain, the difference in class and experience of their cyber football players became noticeable. They turned each micro-episode to their advantage. But we looked decent against such a strong opponent.

You have to be realistic. We understood that the second place would satisfy us completely, considering the result of the last Euro qualification for the national team of Ukraine. In general, we are satisfied with the results of the selection and the experience we will need in the future. The most positive moment is our victories over the team of Northern Macedonia, which was the main competitor in the fight for second place. As for the negative, it is still the fact that we did not manage to take points from the Spaniards, although we were close to it. "

But not only the Spanish national team managed to deprive the Ukrainians of points on the second day of qualifying. In the final game series, the Finnish national team unexpectedly fired, with only one blue and yellow team managing to score five goals. Serhiy Sergobibika Marchenko is sure that the lack of motivation prevented him from finishing the selection with the best statistics:

"After we played the most important matches and secured the second place, and the first became unattainable for us, it turned out to be difficult to get together for a match without tournament motivation.

Having a 99% guarantee of second place, we played with the Spaniards to win, because we had to play a handicap of three goals after the first day of play. Therefore, I did not act on the score, scoring the first goal, but continued to play aggressively to achieve more. The same story was during Igor's match. We lost because we became hostages of the tournament situation after the March defeat by Spain, because that result forced us to go to the end. In my opinion, Ukraine played on equal terms with Spain.

At the beginning of the playoffs, all teams will have a 60% chance to advance. It will be two groups of five teams, where absolutely all participants will be competitive. These will be very difficult matches for everyone. "

We will add that 10 teams will take part in the playoffs and will take the second places in their groups. According to the results of the draw, our team will get to one of the two groups with four other contenders to reach the final round. The blue and yellows are waiting for eight decisive series, which will determine their fate in the current European campaign. The eEuro-2021 will feature three teams from each group with the most points.

It will be recalled that the second European e-football championship under the auspices of UEFA will be held on July 9 and 10 in London.

The draw for the play-off qualifiers of the European Cyber ​​Championship ...

Watch live on the YouTube channel UAF, who will get to the national team of Ukraine in cyber football in the discipline FIFA!

Today, April 22, the group stage of the final cyber football will take place ...

On Tuesday, April 20, registration for the Ukrainian eCup tournament ended ...

We present the player of the national team of Ukraine with FIFA: Andriy CIG_STEPOVER Shakalov

Andriy CIG_STEPOVER Shakalov became one of the two winners of cyber football ...

The draw of the final of the spring qualification ESportsBattle | took place FO ...

Oleksiy ForlanFS Mercer became the third player of the national team of Ukraine in cyberfoot ...