Mykola Kostenko: "At the Independence Cup, the players of the national team of Ukraine played at a very high level" 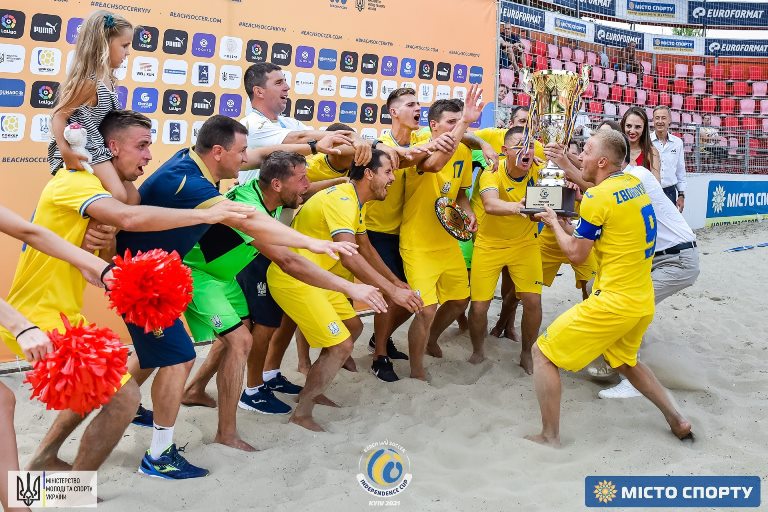 Mykola Kostenko, the head coach of the Ukrainian beach soccer team, summed up the results of the 2021 Independence Cup, which took place on July 23-25 ​​at the Hydropark Arena in Kyiv.

The Ukrainian beach soccer team won the Independence Cup. In the course of the competition, the blue and yellows defeated Turkey (8:3) and Oman (3:1) and ceded to the United Arab Emirates (5: 5, 3: 4 on pen.), scored six points and took first place in the standings.

The coach of our national team Mykola Kostenko commented on the performance of his wards: “It was a high-level tournament in which we were faced by very serious rivals. Oman and the UAE, for example, are preparing for the World Cup, so they had additional motivation. Turkey also arrived in a strong lineup, although they experimented with new goalkeepers. It was not easy to play with them all.

Due to various reasons, we were not able to involve all our leaders in this tournament. Yes, before the competition in the calendar match of the Kyiv championship, Ihor Borsuk was injured, and we were counting on him a lot. In addition, in the first match, with Turkey, due to disqualification, we could not involve Nerush and Shcheritsa. Despite this, the guys who were in the application, definitely played at a very high level. I have no complaints about their dedication and the quality of the game. We achieved our goal, won first place, so I'm happy.

I will note that we had a newcomer to the tournament - Oleg Shitnik from NC Beachsoccer. He took part in all three matches, joined the team well and did not drop out of the game. Of course, he still needs time to fully adapt, because the team has a slightly different style of play than his club. I think that there will be a few more meetings and matches, and he will finally join the team. He is a player with great potential, with good technique, and we are counting on him in the future.

There is also bad news. Unfortunately, in the last match, against the Emirates, our goalkeeper Andriy Nerush suffered a very serious injury. Of course, everyone is ready to win, but when a player clearly does not have time and goes to the podcast just at the goalkeeper, who already controls the ball, it's a dirty game. I believe that it is unacceptable to do so, and the arbitrator should have shown the violator a red card. As a result, Andrew will need surgery, because he has a fracture with displacement. We hope that our goalkeeper will recover as soon as possible, he is a real professional and fighter, but Nerush is out of the training and game process for at least a month and a half. This is a very big loss for us.

But life goes on, and now we need to prepare for the next competition - the 2021 Euroleague Super Final. For the next two weeks, the national teams will play for their clubs in the Kyiv championship. Then, according to preliminary data, the Ukrainian championship will take place in the capital on August 20-24, and two or three days after it we will start direct preparations for the Superfinal. "

It will be recalled that the 2021 Beach Soccer Euroleague Super Final will be held on September 9-12 in the Portuguese town of Figueira da Foz.

Mykola Kostenko, the head coach of the Ukrainian beach soccer team, talks about ...

Mykola Kostenko, the head coach of the Ukrainian beach soccer team, talks about ...