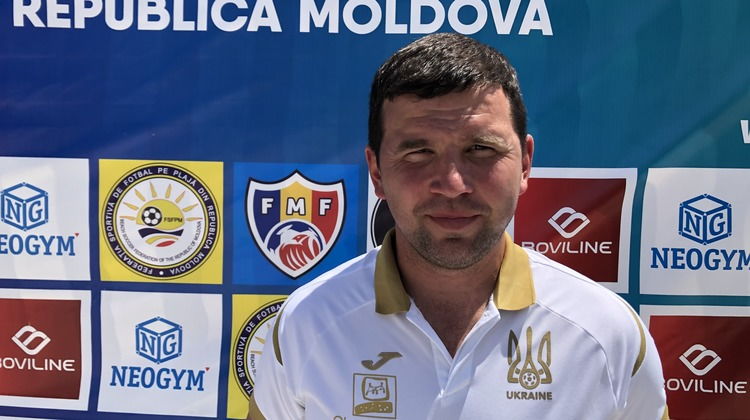 The head coach of the Ukrainian national beach soccer team Mykola Kostenko commented on the performance of our team in the Euroleague Superfinal 2021.

The Ukrainian beach soccer team finished its performance in the Superleague of the Euroleague-2021, which took place from 9 to 12 September in the Portuguese town of Figueira da Foz. Blue and yellow took seventh place in the tournament, winning the final match against Poland with a score 7:3.

Mykola Kostenko, the coach of the Ukrainians, summed up the results of the performance in Portugal: “The first match of the tournament was decisive for us. — against the hosts. They did not perform very well at the world championships and were very motivated at these competitions. In addition, the Portuguese had great support from their fans.

The mood of the boys for this game was very good, and there were no questions about readiness. The Portuguese had only one moment in the first period, which they realized, and we had three chances, but maybe a little bit of luck, because the ball hit the crossbar and passed a few inches from the rack. Physically, we looked better, and the goal was clearly ripe.

But here was an episode that became key not only in this match, but in the next. Our goalkeeper Volodymyr Gladchenko probably instinctively pushed the opponent away and received a straight red card. We then re-examined the repetition and believe that the judge's decision was not entirely correct. There was no aggression or any blow, but a simple push on the shoulder. And the experienced Portuguese player also finished the episode, falling pictorially. Unfortunately, the German referee, who was very meticulous with us at this tournament, showing three red cards in two matches, did so and removed Gladchenko from the field. It is significant that usually two disqualification matches are given for a direct red card, and our goalkeeper was given only one. There were much tougher moments in the parallel games, but there were only "mustard seeds".

We are not looking for reasons for a bad performance only in the refereeing, but this moment immediately turned the whole game upside down. Our other goalkeeper, Andriy Nerush, — a very cool player, but a serious injury he suffered in July at the Independence Cup knocked him out of the game. Functionally, he managed to recover, but the feeling in the game moments was not the best. He is a good man, he fought and the last duel with the Poles has already taken place at his usual level.

The removal of Gladchenko, and then Shcherytsia in the same match, which was also optional, somewhat broke our game. We lost to Portugal - 5:7and then Italy - 3:5. The players in the second match lost some peace of mind. The Italian goalkeeper scored three shots in a row with a score of 1: 1 and scored three goals with a ricochet and rebounds. We lacked some concentration ... With Switzerland, which we lost 6:7, also came out some illogical moment in the 50th second. Andriy Pashko earned a red card, this time one hundred percent correct, knocking down Stankovych. It is also a consequence of the first two games, after which the boys felt dissatisfied and tried to prove that they are capable of more. Sometimes they tried too hard, they started. In the match with the Poles finally broke through. Both our attitude and class prevailed.

Vitaly Sidorenko and I analyzed this Superfinal, we see that there is something to work on. No one has canceled the well-known rule: the team wins, the coach loses. The results have been summed up, we should move on. At the moment, the players of the national team have two weeks of rest, and let's see there. "

It should be noted that the last tournament of this year, in which the Ukrainian beach soccer team can take part, is the Intercontinental Cup, which will be held from November 2 to 6 in Dubai. However, the composition of the participants in these competitions is still unknown.

The national beach soccer team of Ukraine lost in its second match ...