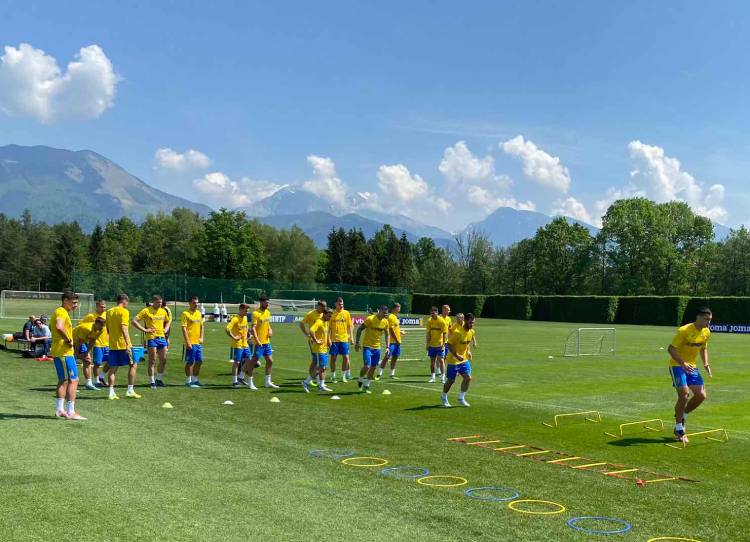 Yesterday to the location of the national team of Ukraine in Slovenia have arrived three legionnaires. All of them went with the team to Italy, where today the blue and yellows will meet Empoli in a friendly match.

The striker of the German "Hansa" Danilo Sikan and the defender of the Czech "Slavia" Taras Kacharaba spoke about the club's affairs and their mood after arriving in the national team of Ukraine.

Danilo Sikan: "I feel good, a little tired after the road. However, everything is fine, I do not need rest, I am ready for everything, I am preparing in a good mood.

As for the Hansa, we are pleased to have retained our place in the second Bundesliga, but the result of the last match is disappointing, because we lost. However, we will still have an attempt to play better next season.

I have already got used to the club. All the guys helped me a lot from the beginning. They asked how things were and how they could help me and my family. This impressed me a lot.

Did I expect a call to the national team? 50 to 50. Of course, this is very important to me. We must prove to the whole of Ukraine that we are ready and fighting for the whole country. We have a great opportunity to go to the World Cup.

My mother and grandmother are now staying in Germany. But a lot of relatives are in Ukraine, I'm very worried about that. I communicate with them every day. They have sirens every day, very hard. The whole country hopes that everything will be fine. And we will win - it's one hundred percent. "

The Czechs strongly support Ukraine on all fronts. The coach of "Slavia" wished success to everything without injuries. He watches his players, he knows how important these matches are for our state. He said he would keep his fists up for us.

My wife was with me all the time. My parents and my wife's parents are now in Ukraine, in the Lviv region. I am very worried about this terrible situation. This is the worst thing that could happen in our country. We communicate with relatives every day, follow the news, we know what is happening in Ukraine.

The whole country will watch the current cycle of the national team. Very important matches are ahead. I hope the guys will do their best on the football field to complete the task.

We had a Prague derby on Sunday, but I didn't play. The coach made some adjustments, released players who played less, because we had a long and quite difficult season. We played in the League of Conferences, the Czech Cup and the championship, there were many matches. However, now I have joined the team, the emotions are positive, I am glad to see all the players, all the staff. The mood is only combative. "

It will be recalled that the match of the semi-finals of the World Cup qualifiers play-offs between the national teams of Scotland and Ukraine takes place on June 1 in Glasgow at the Hampden Park Stadium.