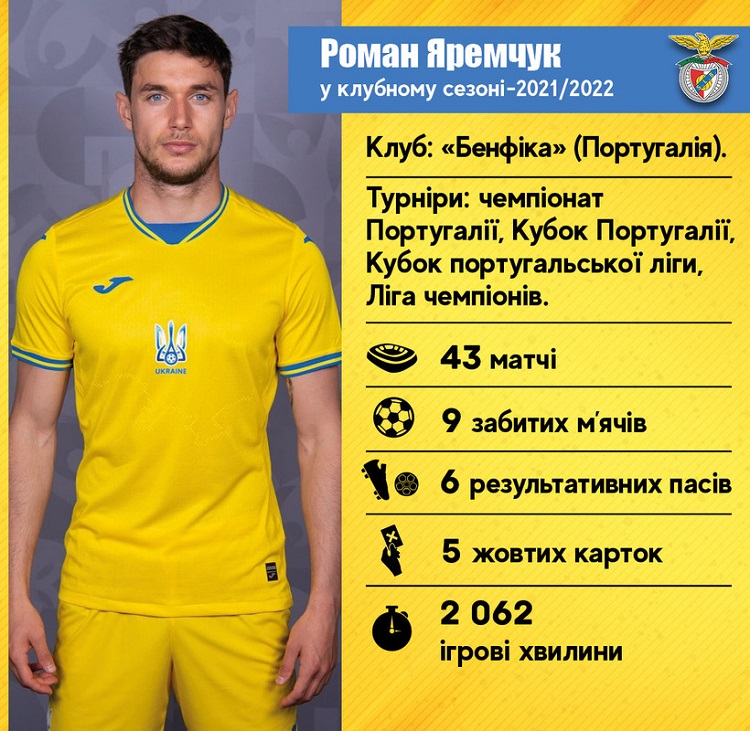 The debut season of the striker of the Ukrainian national team Roman Yaremchuk in the Portuguese "Benfica" is somewhat difficult to describe in one word.

On the one hand, our forward participated in all the tournaments in which the "Eagles" played, and played a total of 43 matches in their team. He played exactly the same amount in the 2020/2021 season, when he played for the Belgian "Gent". On the other hand, the scorer's performance dropped significantly. If in Belgium during the season before last Roman scored 31 points according to the "goal+pass" system (23+8), then in Portugal in the past - only 15 (9+6). However, it is definitely worth noting here, firstly, the debut in a new championship, and secondly, a different, higher level of expectations, rivals and competitions.

Of the four tournaments in which "Benfica" played, Yaremchuk scored goals in two - in the Portuguese championship and the Champions League. But among his victims, among others, were such teams as "Porto", "Ajax", "Liverpool" and "Dynamo" Kyiv...

Unless something unexpected happens, we can say with a small amount of optimism that after adaptation in Portugal, the second season should be more productive for the Ukrainian. In any case, we all hope so.

In the 2nd round of the Portuguese championship, "Benfica" striker team...

In the second leg of the third qualifying round of the Champions League, Port...

Champions League. Roman Yaremchuk took part in the crushing victory of his "Benfica"

In the first match of the third qualifying round of the Champions League against...