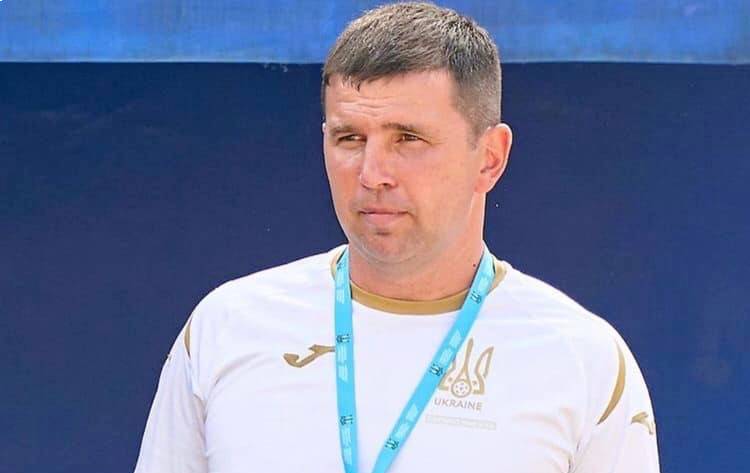 The head coach of the Ukrainian beach soccer team, Mykola Kostenko, analyzed the performance of our team at the first stage of selection for the Euroleague Super Final 2022.

From June 30 to July 3, the Ukrainian beach soccer team took part in the Euroleague 2022 qualifying tournament in Nazare, Portugal. In the first match, the blue and yellow lost to Spain (1:4), and in the second - Italy (3:5).

The results of the performance of the Ukrainian national team at this stage of the competition were summed up by its coach Mykola Kostenko.

"Of course, two defeats is not what we expected. But the level of training of the Spaniards even surprised me a little. Functionally, a very strong team. Firstly, they had a change of generations, tall athletic football players appeared, such as Francisco Cassano, who is 1.90 m tall. Their second four is almost all like that. And at such a height, they are well coordinated, they hit "scissors" perfectly. Secondly, the Spaniards have two excellent goalkeepers. I really liked both Francisco Dona, who played with Ukraine, and Francisco Camacho, who worked in the match with Germany. Two levels according to the class of goalkeepers. The physical form of field players is generally impeccable.

Due to speed, teamwork and even form, they proved to be stronger than us at the moment. They have special pro jerseys with sensors that they have been using since last season. The same as the leading national teams in major football. That is, a person from the scientific research group can immediately see all the players' indicators at the computer. Well, the most important thing is training, meetings and friendly matches. The playing tone of the Spaniards was completely different from ours. During the game, we adapted a bit, found some connections, but without what you can work on at fundamental meetings and friendly tournaments, it was very difficult.

It was a little better with Italy - elements of player interaction began to appear. I somewhat disagree with the refereeing decisions during this meeting. We were not credited with a clean sheet for a score of 1:2 at the end of the second period. Moreover, the referee was just nearby and should have seen how the goalkeeper of the Italians got the ball already behind the goal line. And the red card of Dmytro Voytenko, in my opinion, was not very objective. The replay clearly shows that our player did not touch the opponent's legs, and if there was a hand touch to the shoulder, it was very slight. Such a foul even for a yellow card - with a stretch. Such errors of judgment happen. Even with the score 3:4, they should have scored in the last minutes, but, unfortunately, they did not hit the empty net from close range. This is already football.

We did not complete the task, but there are no victories without defeats. Now we will radically revise our preparation in order to approach the selection for the European Games in a slightly different way. Theoretically, we still have a chance to fight for the Euroleague gold, but there is a very difficult schedule. The Germans have to beat the Italians, we have to win the last two matches and then if we have equal points, Italy and Germany can go to the semi-finals due to the better goal difference. Such a possibility is illusory. So the number one task is to qualify for the European Games.

We are currently resting for a week. Then we will analyze the matches held in Nazaré. Next week we will start training with tactical exercises in recovery mode. Classes will be held three or four times a week. In the morning, the boys will train with the national team, and in the evening - in their clubs. They will also take part in the Kyiv championship," said Mykola Kostenko.

We would like to remind you that now our team is waiting for the second stage of selection for the EuroLeague 2022 Super Final, in Alghero, Italy, and, in the case of a successful performance, the actual Super Final, which will take place in the same town (September 6-9). The 2022 Euroleague Super Final is also a qualifier for the 2023 European Games, which will be held in Krakow.

Today in the Spanish city of San Sadurni d'Anoia, a procedure was held...

Ukrainian referee Dmytro Dudka officiated at the final match of the division...

The representative of Ukraine will judge Euroleague-2022 beach soccer matches

Ukrainian referee Dmytro Dudka will work at the matches of the V division in Euro...

Today in the Spanish city of San Sadurni d'Anoia, a procedure was held...

After the performance at Mundialito-2022, the women's beach soccer team of Ukraine...

Ukrainian referee Dmytro Dudka officiated at the final match of the division...