"There is not and cannot be any condition under which any Russian attack on Ukraine becomes justified." Address of the President of Ukraine Volodymyr Zelenskyi 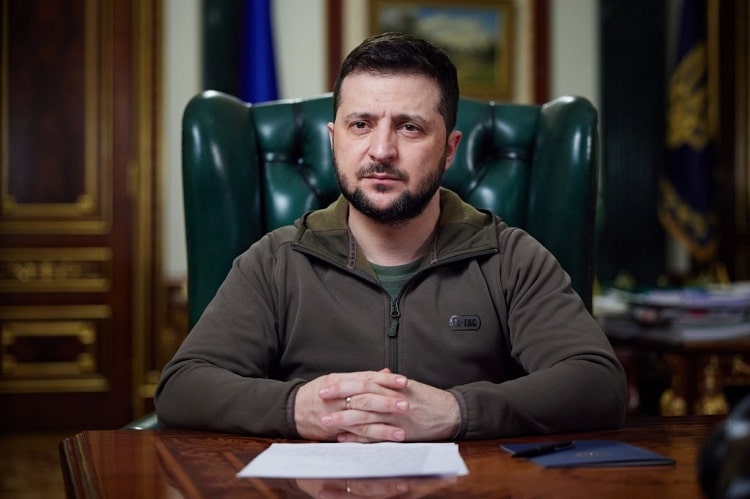 The President of Ukraine, Volodymyr Zelenskyy, addressed the people, talking about the meeting of the Staff of the Supreme Commander-in-Chief and the impossibility of justifying any Russian attack on our country.

It was a deliberate strike by the occupiers, another act of terror — cynical and calculated. They knew where they were hitting, and they obviously wanted people to get hurt.

However, regarding this and thousands of other crimes committed by Russian terrorists, we do not see clear and timely reports from some international organizations. We saw today a completely different report from Amnesty International, which unfortunately tries to amnesty the terrorist state and shift the responsibility from the aggressor to the victim.

There is not and cannot be - even hypothetically - any condition under which any Russian attack on Ukraine becomes justified. Aggression against our state is unprovoked, invasive and frankly terroristic. And if someone makes a report in which the victim and the aggressor are allegedly the same in some way, if some data about the victim is analyzed, and what the aggressor was doing at that time is ignored, then this cannot be tolerated.

Almost 200 religious buildings alone — temples and prayer houses of various denominations — were damaged or destroyed by Russian strikes. Almost 900 medical facilities. Over 2200 educational institutions. Dozens of universities, hundreds of schools and kindergartens. The occupiers repeatedly deliberately fired artillery and mortars at people queuing for water, at evacuation buses, and repeatedly at public transport stops. The Russian army did not stop before striking even at memorials to the victims of the Holocaust, at cemeteries... At the camp with prisoners of war in Olenivka. And there are no reports about it for some reason. This is such immoral selectivity.

Anyone who amnesties Russia and who artificially creates such an informational context that some attacks by terrorists are supposedly justified or supposedly understandable, cannot fail to realize that this is helping the terrorists. And if these are manipulative reports, then you share the responsibility for the death of people with them.

Every day we expand the possibilities of our foreign policy - formal and informal. I spoke today with representatives of the African mass media — from Nigeria, South Africa, Kenya and Ghana. African countries may suffer very seriously due to the destabilization of world markets and global relations provoked by Russia, in particular due to the food crisis. And at the same time, in Africa there is a shortage of true information about the Russian war against our country and a surplus of Russian propaganda. Let's do everything to change this balance.

Negotiations with the President of Guinea-Bissau took place for the first time in the history of our bilateral relations. I noted that Ukraine is ready to be a guarantor of food security for African countries. They discussed the support of our state in international organizations.

Tomorrow - new negotiations with the leader of an African country, and in general, only recently have we started proper communication with eight leaders of African states.

Every day and in various ways, I remind some leaders of the European Union that Ukrainian pensioners, our immigrants, our teachers and other people who depend on budget payments cannot be held hostage to their indecision or bureaucracy. 8 billion euros for Ukraine are currently blocked. And such an artificial delay of macro-financial assistance to our state is either a crime or a mistake, and it is difficult to say which is worse in such conditions of a full-scale war.

I don't want to name which European country is slowing it down now. Let's believe that this is still a mistake and that it will be corrected.

He held a meeting of the Staff of the Supreme Commander-in-Chief today. Minister of Defense of Ukraine Oleksiy Reznikov reported on the current supply of troops with equipment and ammunition. Head of State Committee Zaluzhnyi, Head of SBU Malyuk, Minister of Internal Affairs Monastyrskyi also reported. They analyzed the situation in the most acute areas of the front, in particular in the Donetsk region. Particular attention was paid to the state of implementation of the previous decisions of the Stavka, all of which must be implemented 100%.

I signed another decree on awarding our soldiers. 192 combatants were awarded state awards, six of them posthumously. In total, more than 25,5 of our defenders have already been awarded for bravery and effectiveness in battles since February 24. More than 4 thousand - posthumously.

Eternal memory to all who died for Ukraine!

Eternal gratitude to everyone who fights against Russian terrorists!

Martial law in Ukraine has been extended until November 21

Today, August 15, the Verkhovna Rada of Ukraine adopted a decision to extend...

"The stronger Ukraine is, the weaker Russia will be and the shorter this war will last." Address of the President of Ukraine Volodymyr Zelenskyi

General Staff of the Armed Forces of Ukraine: operational information on the Russian invasion (as of 06.00 15.08.2022)