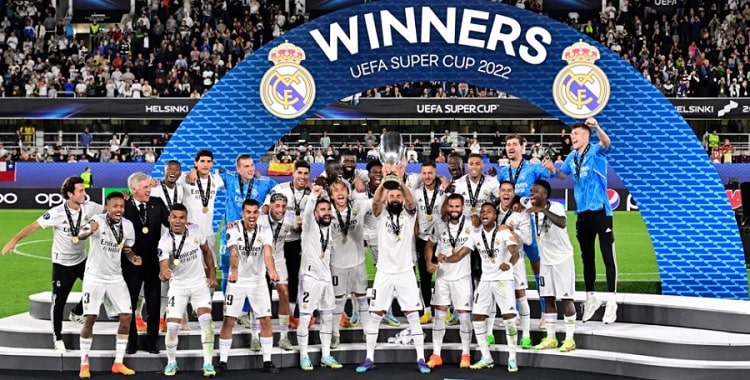 The current winners of the Champions League and Europa League, the Spanish "Real" of the goalkeeper of the Ukrainian national team Andriy Lunin and the German "Eintracht" from Frankfurt met in the Olympic Stadium in Helsinki, Finland.

Our football player spent the entire meeting, which ended with a 2:0 victory for his team, in reserve.

Let's add that for "Real" this victory was the fifth in history. Before that, the Madrid club won the UEFA Super Cup in 2002, 2014, 2016 and 2017. According to this indicator, "Vershkovi" share the first place with "Barcelona" and "Milan", which also have five titles each.

Andriy Lunin's Real Madrid was defeated in the Spanish championship

In the 20th round of the Spanish La Liga "Real" goalkeeper of the national team Uk ...

Legionnaires of the Ukrainian national team in the first part of the 2022/2023 club season: Andriy Lunin

If you consider the status of a strong backup of one of the best goalkeepers of...

In the 1/16 finals of the Spanish Cup, Real Madrid goalkeeper...

In the table of UEFA coefficients for women's clubs, Ukraine ranks 17th

The matches of the group stage of the women's Champions League have ended, and UEFA ...