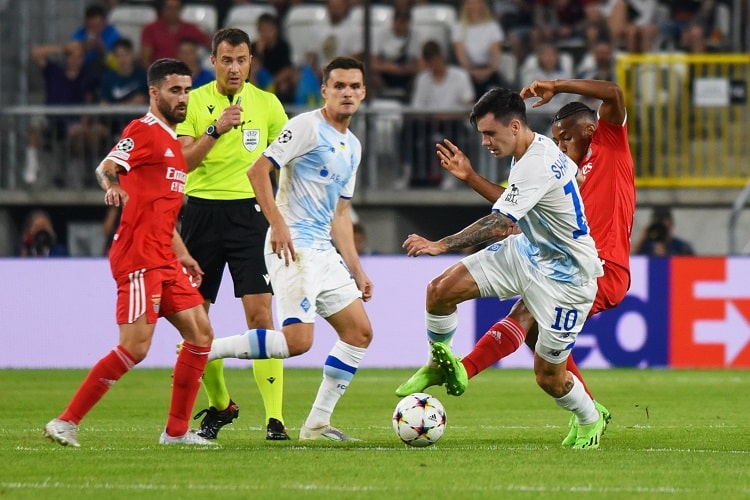 Kyiv "Dynamo" continued its performance in the Champions League by defeating the Portuguese "Benfica" in Lodz, Poland.

Previously, in the qualification of the Champions League, Mircea Lucescu's wards passed the Turkish "Fenerbahce" and the Austrian "Sturm". In the playoff round, Dynamo faced Roman Yaremchuk's Benfica, which knocked out Danish Midtjylland in the previous round. The forward of the Ukrainian national team started the match in Łódź on the bench. We will remind you that due to the Russian military invasion, Kyivans are forced to play home matches of European Cups in the Polish city.

"Dynamo" could not count on the disqualified Sydorchuk and Harmash in this game. Andrievskyi replaced the first in the starting line-up, and Popov also returned to the "base".

"Benfica" actively started the match, Ramush wasted a good chance already in the first minutes. However, the Lisbon team still scored a quick goal - after a pass from Joao Mario from the entrance to the penalty area, Gilberto powerfully applied himself to the ball. By the way, the Brazilian already scored against Dynamo in the group round of the previous Champions League.

The Kyivans responded with a cool shot by Tsygankov, who managed to get the goalkeeper. In the 24th minute, Joao Mario almost curled the ball into the far corner, and in the 34th, after a wonderful long-range attempt, a few centimeters separated Tsygankov's goal.

At the end of the first half, Benfica scored for the second time. Unfortunately, the goal came after a mistake by Tsygankov when passing back, then there was an interception by Neres and a shooting of Bushchan's goal by Ramush. Neres himself could have scored before the break, but he shot past the far post.

At the beginning of the second half, Bushchan parried Neres' long shot. In general, "Benfica" was focused on maintaining the obtained result. In the 67th minute, Dynamo finally created a good chance - after Buyalsky's throw in the penalty area, Karavaev could not push the ball past the goalkeeper.

At the end of the match, Karavaev moved from the flank and shot from a distance from the left, but Vlahodimos came to the rescue. Benfica responded with Rafa Silva's shot over the crossbar. Vanat soon found himself in a striking position, but at the last moment the ball was blocked by Otamendi. As a result, the Kyiv residents failed to change the score on the scoreboard — 0:2.

The return match will take place in Lisbon on Tuesday, August 23.