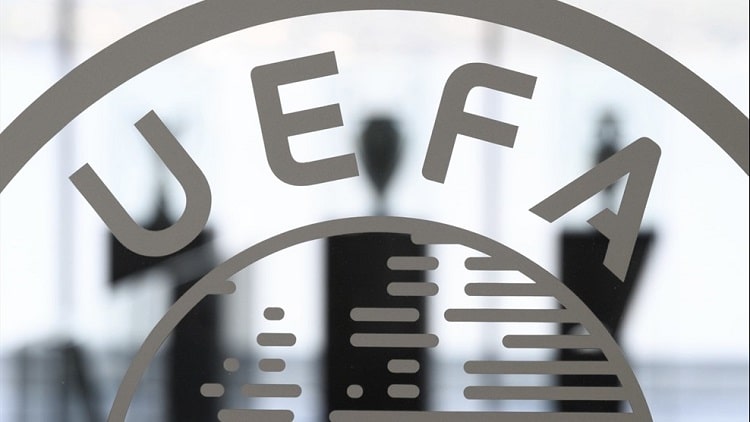 The UEFA Executive Committee, which includes UAF president Andrii Pavelko, following the UEFA Strategy for the Development of Women's Football Time For Action and reforming the tournaments, approved a new competition format in the Women's Nations League and the qualifying tournaments of the Women's Euros and the Women's World Cups, the UEFA official website reports .

The reforms were carried out following the recommendations of the UEFA Women's Football Committee and the results of the working group on competitions among national teams, which included representatives of various national associations.

The new format will be used for the first time in the women's Euro 2025 qualifiers, which begin in autumn 2023. The same principles will be applied to the 2027 Women's World Cup.

The format will combine the UEFA Nations League with European Championship qualification. It includes the principle of transition between divisions (with promotion and relegation), as well as the appearance of the final tournament of the Nations League.

Based on the results of the group stages of both tournaments, head-to-head matches will be held. The new format will divide national associations into three levels. At each of them, the national teams will be divided into groups of four (or three) teams, where they will play a home and away match against each opponent.

After the end of the Nations League, the winner of the tournament and, once every four years, the three European teams that go to the Olympic Games will be determined. The final ranking of the Nations League (with automatic promotion and relegation) as well as head-to-head matches will determine the starting position of the national teams in the qualification for the European Championship.

After the qualification of the European Championship, a final ranking will be drawn up, which determines which national teams directly enter the Euro and who takes part in the contact tournaments of the European selection. In addition, this ranking, with its automatic promotion and relegation, determines in which divisions the national teams will start the next qualifying cycle.

How the new format works

The example is illustrated based on participation in tournaments of 51 national teams. The national team of Ukraine in the Premier Nations League will play in the B division. 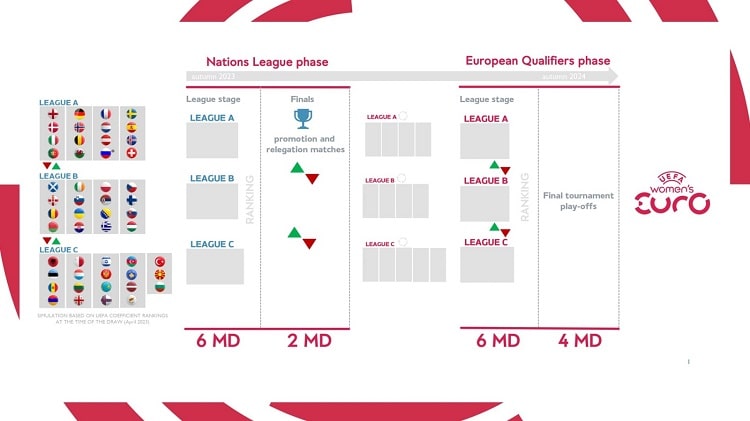 The Nations League starts in the autumn of 2023 and consists of a group stage, promotion and relegation matches, and a final stage, which will feature two semi-finals, a third-place match and a final.

In the group stage, teams will be divided into three divisions based on the current UEFA Women's National Team Rankings.

All matches will be played over six game days, with each team playing one home match and one away match against all the other teams in their group. The ultimate goal of this stage of the competition is to win the Nations League and gain a better starting position for the next draw.

Every four years, the Nations League final will also be the European qualifier for the women's Olympic football tournament. That is, for the first time it will work for teams to enter the 2024 Olympic tournament in France.

The Nations League positions at the end of the group stage determine who will play in the finals, as well as the starting positions for the teams in the European qualification stage. Depending on their group stage ranking after Round 6, teams will either retain their league positions, be automatically promoted or relegated, or participate in promotion and relegation play-offs.

The four group winners of League A will advance to the Nations League final. The relegation finals will consist of semi-finals, a third-place match and a final. Their organizer is one of the participating teams. In 2024, the two finalists will join France as Europe's representatives in the women's Olympic football tournament (along with the third-placed team if France reaches the final). 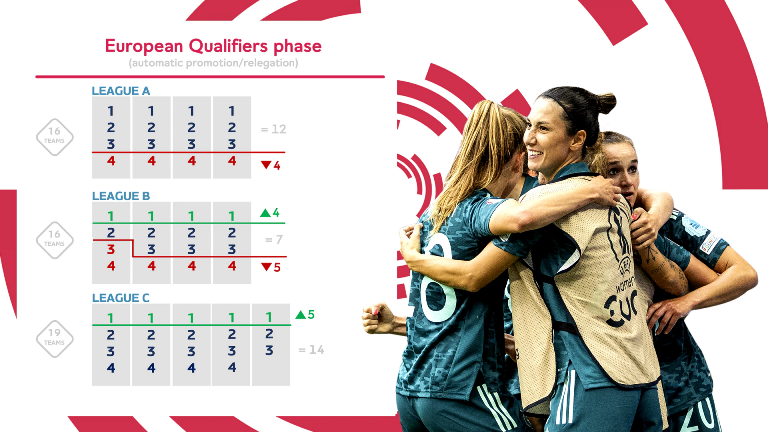 1) winners and runners-up of League A groups remain in League A;

2) the winners of Leagues B and C will be promoted to the next league;

3) all fourth-placed teams in Leagues A and B, as well as the worst third-placed team in League B, will be relegated to the next league; 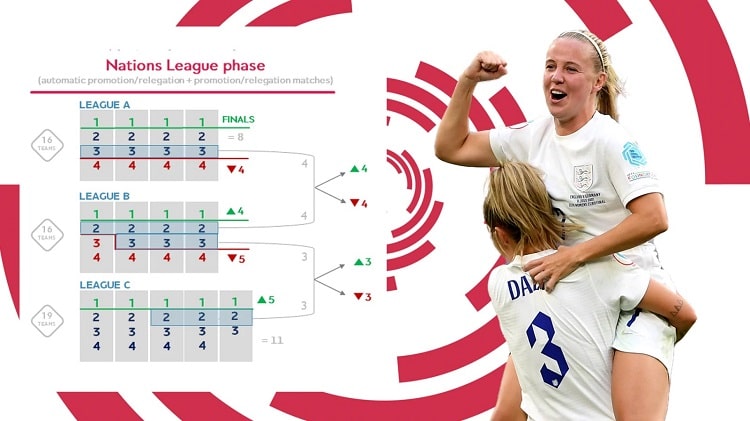 All the remaining teams take part in promotion and relegation matches played at home and away and have another chance to compete for the best starting position in the league in the European qualifiers:

These matches take place in parallel with the Nations League final.

European qualification will begin in the spring of 2024 after the conclusion of the Nations League and will consist of a group stage and a play-off for the final tournament. The European qualifying group stage will follow the same format as the Nations League, with teams divided into three Leagues: League A with 16 teams, League B with 16 teams and League C with 19 teams.

Each team's starting position in the League is determined based on their Nations League results as described above. Again, teams compete in groups of four or three teams (League C) and over six game days. At the same time, each team plays one home match and one away match against all other teams in its group. The ultimate goal of this stage of the competition is to get to the European Women's Championship. 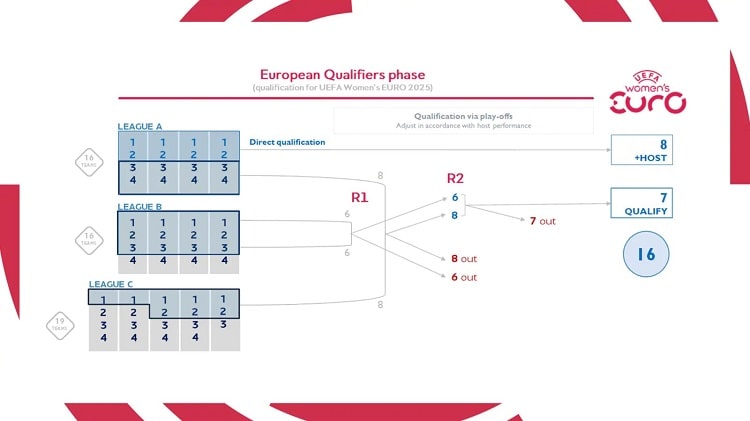 The top eight teams in League A will qualify for Euro 2025. If the host country of the final tournament fails to qualify, it will still be guaranteed a place. In the case of multiple hosts, this guarantee will cover a maximum of two teams.

In the second round, 14 teams will play for seven tickets to the final tournament of Euro-2025.

The selection from Europe for the 2027 World Cup will take place in a similar format, with the difference that the playoff system will be adjusted due to a smaller number of final licenses.

"You have to work a lot to play at the same level as such teams": soccer players of the women's national team of Ukraine - about the defeat in the 2023 World Cup selection match against Spain

Football players of the national women's team of Ukraine Yana Malakhova and Iryna...

WC-2023. The women's national team of Ukraine lost in Spain and finished the qualifying tournament in third place in group B

In the last match of the 2023 Women's World Cup qualifying tournament...

The coach of the women's national team of Ukraine, Luis Cortes, took part in a special UEFA conference

On October 31, the fourth UEFA conference among coaches was held in England...