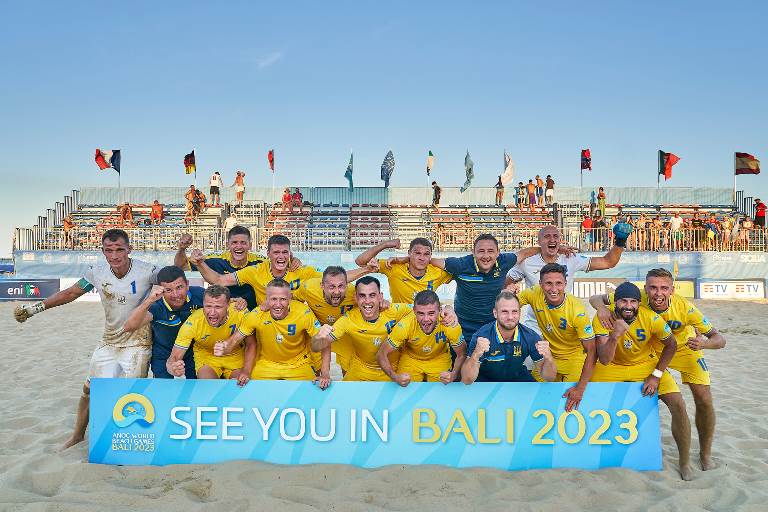 As part of preparation for the current season, Mykola Kostenko's wards held a training camp in May in Kyiv, at the Sunrise Arena in the Hydropark. Due to the difficult military conditions, not all the performers were able to attend it, but those who took part in it were actively preparing for the first official tournament for the blue and yellow team - the Euroleague 2022 selection.

On July 2, the Ukrainians started at the first stage of qualification for this year's Euroleague, which was held in the Portuguese town of Nazare. At these competitions, the Ukrainian national team lost to Spain (1:4) and Italy (3:5).

From August 30 to September 4, the Ukrainian team took part in the European selection for the 2023 World Beach Games in Catania, Sicily. In the first match of the group round, she defeated Azerbaijan (5:4), and in the second lost to Switzerland (3:7). Despite this, our boys reached the 1/4 finals, where they won in a fierce battle in Italy (5:4 OT). In the semi-finals, Kostenko's wards did not cope with Spain (4:7), but in the match for third place they were stronger than the Swiss (4:3). Thus, the Ukrainian men's beach soccer team secured a place at the 2023 World Beach Games in Bali, Indonesia.

Next, the teams flew from Sicily to Sardinia, where in the period from September 8 to 11, they took part in the second stage of the Euroleague-2022, which took place in Cagliari. In the first match, the Ukrainians were able to defeat Azerbaijan (2:1), and in the second they dealt with Germany (3:2). As a result, our boys took third place in group B and reached the so-called small semi-finals, which made it possible to compete for a ticket to the European Games-2023.

In the opening confrontation for the 5th-8th places of the Euroleague-2022, Ukraine defeated France (10:5) and won a ticket to the 2023 European Games in Krakow. In the match for the 5th and 6th places, the blue-yellow team managed to beat Azerbaijan (6:2), becoming fifth in Euroleague-2022.

The Ukrainian national team ended the season with two friendly matches in Japan, where it was invited by the local football association, against the Japanese team. On October 1, Mykola Kostenko's wards conceded the score in the city of Akasi 2:4, and lost in the second match the next day on the same court 3:6.

Thus, this year the national team of Ukraine played 13 international matches — 11 official and two friendlies. In them, the Ukrainians won seven times and lost six times (the goal difference is 51-54). Dmytro Voytenko became the best scorer of the season for the blue and yellow team, who scored 12 goals.

Matches of the men's beach soccer team of Ukraine in 2022

Mykola Kostenko: "The trip to Japan was an invaluable experience for us"

The World Beach Soccer Organization (BSWW) has announced the list of individuals...