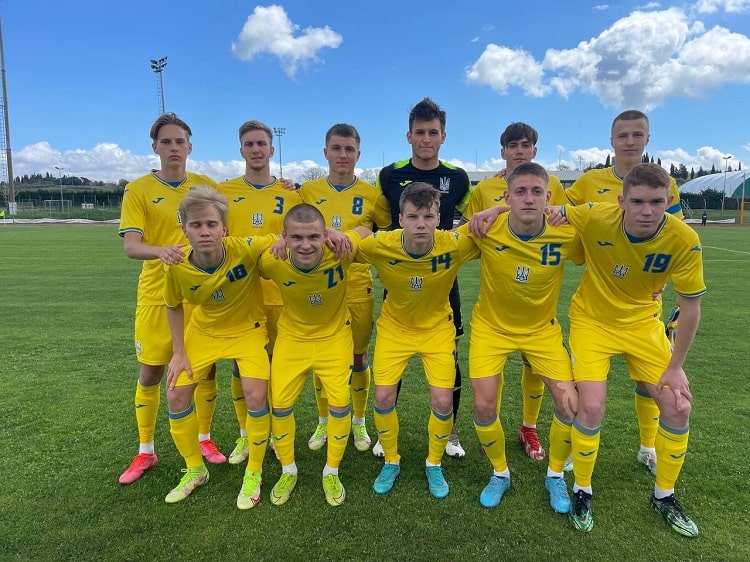 Ukrainian football players born in 2005 were not very lucky when it comes to performances in the national team.

Due to the COVID-19 pandemic, Oleg Kuznetsov was able to take his players to an international match for the first time only in August 2021 (and not in the spring of 2020) — during the Victor Bannikov Memorial, which became the only serious meeting of the team on the eve of the start of Euro-2022 selection (U- 17).

The November qualifying stage (2021) was not without some heroism, which had to be demonstrated after losing the first of three games. First, the Ukrainians lost to the Welsh (1:3), after which they predictably defeated Kazakhstan (3:0) and defeated Portugal (3:2), twice losing the score.

But it was not possible to properly prepare for the elite qualification round - because of the war in Ukraine, the full-scale phase of which began in Moscow. UEFA was forced to postpone the matches of our group from the end of March to the last decade of April. The lack of game practice, tone and real physical readiness of our football players affected the chances of Kuznetsov's team in the elite round. After all, there are only three legionnaires among the Ukrainians, one of whom is a goalkeeper. There were enough forces for Kosovo, but not for Poland and especially Italy. Our boys started to score goals, already losing - 0:3. And if there was still a chance to draw the match with the Poles (Mykyta Dzen scored with an accurate shot in the 88th minute), then with the Italians, Nazar Balaba scored his goal already in the 90th + 4th minute.

David Fesyuk made eight saves in the last match, but we should not forget that five minutes in the middle of the second half were decisive. In the 57th minute, Evgeny Yanovych earned a red card with the score 0:1, in the 59th minute, the Italians scored for the second time, and in the 62nd minute, Dmitry Kremchanin hit the goal post from the 11-meter mark (Penalty earned by Maksym Derkach). Italy then made it 3-0 and the deal was done.

"I think that the boys played 50-60 percent, no more," Oleg Kuznetsov summed up the performance in the elite round. — What they showed before, especially in the qualifying tournament, and now is heaven and earth. Now I did not recognize many, but again, there were objective reasons for this. The football players did not have enough playing practice, many of them trained only on artificial fields... When the legs do not run, the head stops working as well. There were many unjustified losses, players sometimes made illogical decisions, but this is all due to a lack of full preparation. For example, the same Italians played, if I'm not mistaken, 10 matches this year, the Poles also have something similar. That's why you can't get anywhere from reality."

The next important stage in the life of this team is the selection of Euro-2024 (U-19). Lot posted her in company with the national teams of Slovakia, Kosovo and Malta. Matches will happen November 15-21, 2023 in Malta.

Note. The clubs that the football players represented at the time of the matches are given.

Oleg Kuznetsov: "There is no favorite in our qualifying group for the European Championship"

Head coach of the youth national team of Ukraine U-18 Oleg Kuznetsov comment ...

Officially. Decision of the UAF Executive Committee on the coaches of the national teams of Ukraine

Having considered the proposal of the Committee of National Teams of the UAF, Executive...

Oleg Kuznetsov: "There is no favorite in our qualifying group for the European Championship"

Head coach of the youth national team of Ukraine U-18 Oleg Kuznetsov comment ...