Second League: Minaj goes back to the top, and Crystal reduces the gap to a minimum 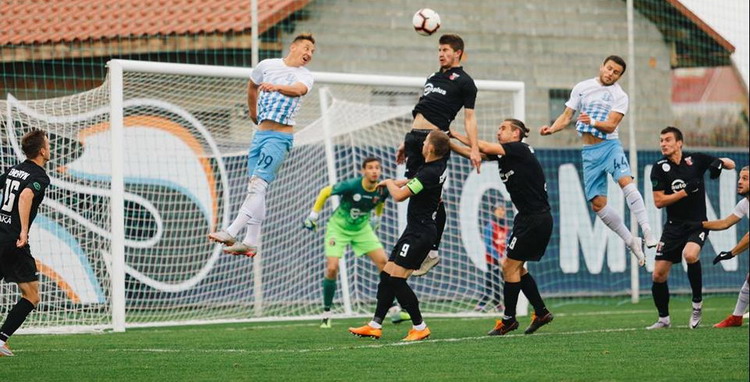 Taking over Mount Heather, the Minaya players returned to the top of the standings in Group A. Photo by fcminaj.com

The intrigue in the rivalry in group "A" does not disappear. Teams from the leading group, as if by agreement, take turns to lead the standings.

So, after the next calendar matches, Minai returned to the top, taking advantage of the defeat of the main competitor in the struggle for promotion in the class - Kalush. The victory of the Transcarpathians over Veres is all the more significant because they did not play in the strongest lineup, in particular, their captain Mykhailo Kopolovets was absent.

The main events of the match unfolded after the break. The top scorer of the group, Robert Hegedos, opened the scoring on the third attempt, though he had twice missed from the goal line. Double the advantage of the hosts Basil Betz. It all went to the smashing of the guests, but after the shot of Vasyl Kobin, their ally became a crossbar.

"Today we did not have any problems," said Igor Kharkovshchenko, the manager of Minaya, after the game. - The guys worked well, they did what we agreed on. I believe that we outperformed Rivne in all components. Although we still limping realization of goal moments. We had a great opportunity long before the final whistle to score three or four goals, remove the issue of the winner from the agenda ahead of schedule and play to our satisfaction… »

Kharkiv's colleague from Veres, Oleg Shandruk, recognized the victory of Minaya as well-deserved. "Unfortunately, in many episodes we did not wait until the end," he commented on the actions of his wards. - I hoped that in the second half we would play more aggressively in attack and push the game away from our goal. But this was not our day. "It's very difficult to defend against a team like Minai for a long time, because its players have good control of the ball, and without a quality counter-game on our part, it was only a matter of time before we missed« "

The rivalry for the first place in group "B" also intensified. The favorite, "Flint", squandered its advantage over the pursuers, and "Crystal" after the victory over "Miner" reduced the gap to a minimum. Anton Bryzhchuk and Vladyslav Ignatiev scored in the central match of the round for Kherson, who also could not be helped by the team captain Serhiy Tsoi.

"We realized that it would be a very difficult game," said Serhiy Shevtsov, the manager of Krystal, "because the neighbors in the standings were meeting." Not all my wards played as we would like, in particular, we lost to the Kryvyi Rih in mobility. But, fortunately, they realized their scoring moments, and when it was difficult, they endured, clenching their teeth, and still gained very valuable three points… »

The Pitman has not shown everything he is capable of, - said the head coach of the guests Hennadiy Prykhodko after the match. - Yes, we had a territorial advantage, we controlled the ball more often, but we didn't get to the goal moments. So, somewhere we didn't work hard while preparing for the match, so I don't take the blame off myself either… »

The last vacancies in the second league teams are being filled. Director of FC & ...

Second League. Debutants are active in the transfer market, and "Crystal" has not yet decided on the helm

12 clubs are going to make their debut in the championship of Ukraine on July 25 ...

Second League. So far, the most active in the transfer market - Lviv "Carpathians"

All participants of the championship of Ukraine among the teams of the second league have already started ...

Second league: 32 participants will compete in two groups, including 12 debutants

At once 12 collectives will become debutants of the championship of Ukraine among com ...

Today the program of the starting round of the new championship of Ukraine in the elite ...

Premier League. In the first match of the 2021/2022 season, Lviv drew with Mariupol

The 31st championship of Ukraine in the elite division started today with a match ...