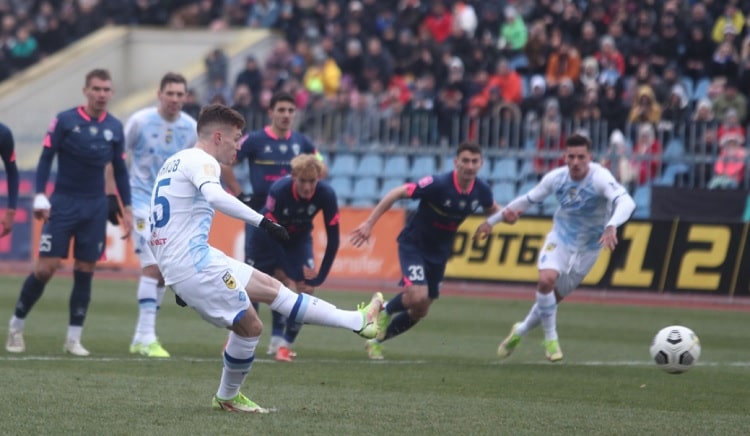 On Saturday, Kyiv's Dynamo won the away match of the Ukrainian championship against Minay.

This success allowed Kyiv to become the sole leaders in the standings of the national championship at least until tomorrow.

Dynamo started the match very powerfully, created several moments and took the lead in the 12th minute. Gorin demolished Buyalsky in his own penalty area, and the referee pointed to the point. Tsigankov scored flawlessly - 1: 0. Four minutes later, Garmash checked the strength of the Transcarpathian goalpost. Kyiv continued to press and in the 40th minute had to double their advantage, but the same Garmash wasted a one hundred percent opportunity.

In the second half, "Minai" woke up, and the game followed a completely different scenario. In the 63rd minute Seleznyov hit the post with a header, and in stoppage time Meshi miraculously did not equalize the score, not aiming at the goal from five meters. Retribution came immediately. In a minute Shaparenko in the center of the penalty area received a pass from Sydorchuk and from the fly sent the ball into the net - 2: 0.

As part of Dynamo, nine players appeared on the field, who were called up for the November training camp of the national team of Ukraine: Bushchan, Sidorchuk (effective transfer), Shaparenko (goal), Tsygankov (goal replaced by 90 + 4th minute), Karavaev (substituted in the 76th minute), Garmash (replaced in the 76th minute), Mykolenko, Buyalsky and Zabarny.

The teams that took the third and fourth places in the standings - "Vorskla" and "Dnipro-1" - met in principle. The match took place at Dnipro-Arena, and the hosts defeated their opponents. Dnipro scored in the 10th second of the match. Nelson sent Gutsulyak from his half of the field, and the latter did not make a mistake - 1: 0. And although there were no more goals before the break, after that the visitors' goalkeeper capitulated four more times. Despite a missed penalty in the 50th minute, Dovbyk quickly rehabilitated and scored a double within two minutes. The beating of Poltava residents Pihalonok and Hutsulyak was completed. All that Yuri Maksymov's wards managed to do was Kravchuk's goal of prestige in the 84th minute. In the end - 5: 1 in favor of Dnipro.

The match was attended by two players of the national team of Ukraine, who were called up for the November training camp. These are Dnipro-1 forward Dovbyk (two goals, unrealized penalty, substituted in the 76th minute) and Vorskla goalkeeper Riznyk.

Chernihiv "Desna" quite predictably defeated "Chernomorets" in Odessa and gained three points. Oleksandr Ryabokon's wards dominated throughout the match, but were able to realize their advantage in goals scored only once. The goal was scored by Andriy Totovytskyi's shot into the empty net in the 29th minute. He was assisted by Bilovar, who had previously successfully fought for the ball. 1: 0 - victory of the guests.

Intermission in the Vbet League: most clubs will go to Turkey, Dynamo released Mykolenko

The UPL Directorate has approved the dates and times of the matches of the 19th, first ...