UEFA Champions League. Dynamo failed to qualify for Bruges and flew to the Europa League 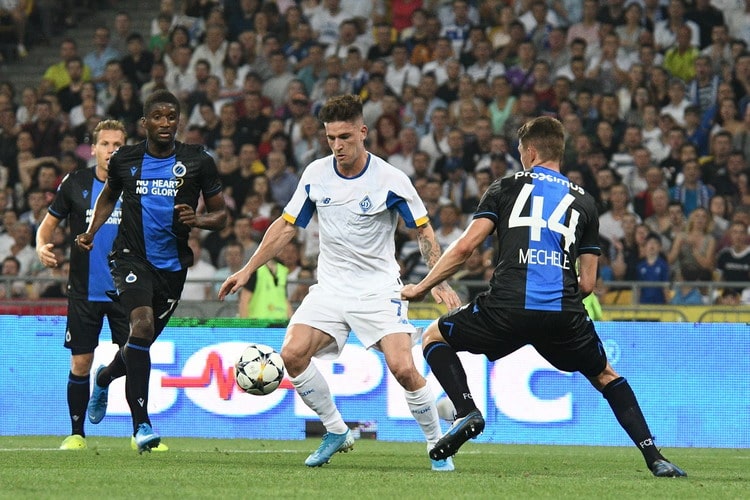 In the second match against Belgian Brugge, Kyiv's Dynamo drew effectively. This score satisfied the rivals of the white and blues, who advanced to the playoffs.

The beginning of the season for the vice-champion of Ukraine turned out to be a real test of strength. Kyiv has already played two matches against Shakhtar Super Cup of Ukraine and championship, and the second of them fell on the interval between the fateful fights with "Bruges". So it is not surprising that the coaching staff resorted to the rotation of performers.

In comparison with the first meeting between these teams in the starting lineup of "Dynamo" instead of Sidorchuk with Garmash in the center of the midfield appeared Shepelev and Andrievsky, on the right flank Karavaev replaced Tsygankov, and on the edge of the attack played not Besedin, and newcomer white-blue Rodri who has already opened the scoring for the goals scored in the aforementioned last game with Shakhtar. In Bruges, on the other hand, the changes were minimal. Only instead of Mitrovic in the center of defense from the first minutes came Mechele.

The course of the match was influenced by a quick goal scored by the hosts. Buyalsky started the attack from the depths and completed it himself. Andrievsky, Verbych and Mykolenko took part in the goal combination, and Vitaliy struck a productive shot in the near corner after a pass from the flank. This ball gave Dynamo confidence, and in the 17th minute another dangerous attack from the left almost ended in a goal, but Verbych missed from a good position.

In general, the left flank of the Kyiv attack before the break caused the opponent the most trouble. As for "Brugge", except for sharp crosses from Sable, the players of the Belgian club in the first half for a long time could not create almost anything. But the first corner in their performance was decisive. Delhi jumped over Burda and hit his head, after which the ball flew into the goal. 1: 1, and the situation for "Dynamo" became threatening.

The second half began in heavy rain. The White and Blues actively entered the game after the break, quickly struck a few blows and soon took the lead again. Verbych hit the post, and Shepelev was the first to finish. However, this was not enough for the overall success, given the away goal rule. The Kyivans did not manage to create real pressure on the visitors' goal. And in the final minutes, when both teams played in the minority after the removal of Burda and Tau, "Brugge" generally equalized. Mechel's own goal and Openda's ball in overtime could no longer affect the overall result of the confrontation.

The match was attended by Dynamo players called by Andriy Shevchenko for the June matches of the Euro 2020 qualifiers against the national teams of Serbia and Luxembourg: Boyko, Burda (withdrawal), Mykolenko (goal pass, yellow card), Shepelev (goal replaced by the 83rd minute), Tsygankov. As a part of "Brugge" the whole match was played by the defender of the national team of Ukraine Sobol.

Dynamo Kyiv is forced to postpone their dreams of playing in the Champions League for another year. This season, Kyiv will once again take part in the group stage of the Europa League, the draw of which will take place on August 30.