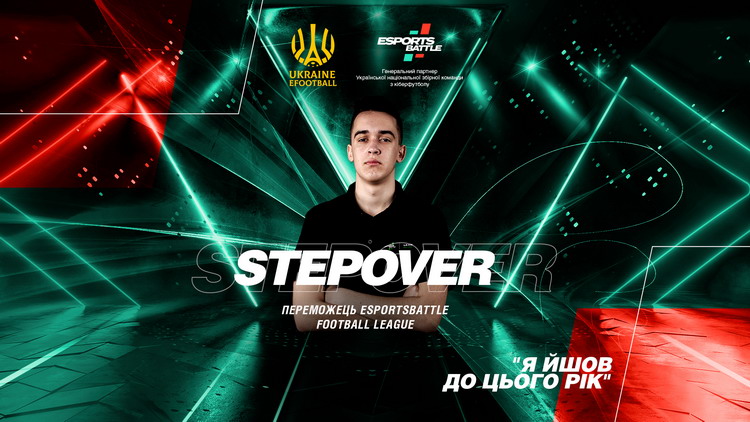 The winner of the PRO Division was Andriy STEPOVER Shakalov, a young cyber football player from Dnipro.

ESportsBattle asked the winner about their impressions of the tournament and future plans.

- Andrew, congratulations on your victory! How did you prepare for the Grand Final? Was the approach different from preparation for seasonal qualifications?

- With each subsequent seasonal qualification, I intensified my training. I knew who my opponents would be, and I watched matches involving them to identify strengths and weaknesses. I understood very clearly that I needed to play aggressively, apply active pressure and not change my playing style - always try to act first.

- How do you assess your psychological state during the Grand Final?

- I didn't care at all, I was collected as planned, I finished the first day of the tournament with confidence. The next day I was a bit psychologically devastated, but, surprisingly, it helped me play more focused. An interesting episode occurred in the game against Eugene Yozhyk Mostovik. He scored the ball and shouted loudly: "Gooool!" In general, I did not pay attention to the rivals, but at that moment I was a little scared - it can be seen even in the video.

- Which of the rivals was the hardest to play against?

- It was difficult against BlackStar98, because I did not always understand what to expect from him in the attack. In the final - against xSHILITO, because we really wanted to win. All matches with him, except the last one, were tense, the game was played mainly in the center of the field, no one wanted to give up, take big risks and give the ball away. When we scored 2: 2, I changed to a game of five defenders. After his first goal, xSHILITO, of course, gained an advantage both in the game and in terms of psychology. But in the last match I still managed to get together and win.

- You got a place in the national team of Ukraine in cyber football. What are your plans for next season?

- I went to it all year. All the athletes in the Grand Final were very high, and I tried not to fall behind. I know that some of the players are already ready for next season, but I still had something to say this year. I believe that desire has won.

The cup needs to be defended, so next year I plan to play actively in tournaments and will try to take part in European and world competitions.

ESportsBattle | FOOTBALL LEAGUE - Cyber ​​football league, which consists of four seasonal qualifiers and a Grand Final, which take place during the year. The winner of the league gets a place in the national team of Ukraine in cyber football and will represent the country at international competitions. This is the first national cyber football league organized with the support of the Ukrainian Electronic Football Association (UAEF) for professional players (PRO Division) and amateurs (AMATEUR Division).

ESportsBattle - the largest e-sports platform in Ukraine, which includes an e-sports academy, national tournaments, 24/7 matches, as well as a community of players and fans of esports.

On December 18, the first stage of a series of tournaments of the largest Ukrainian ...

The national team of Ukraine in cyber football in the discipline of FIFA began its performances ...

On Thursday, December 16, the national team of Ukraine in cyber football in the discipline of FIFA p ...

On January 27 and 28, the national team of Ukraine in cyber football in the discipline of FIFA grat ...

The final of the first stage of the largest ... will take place on January 22 and 23.