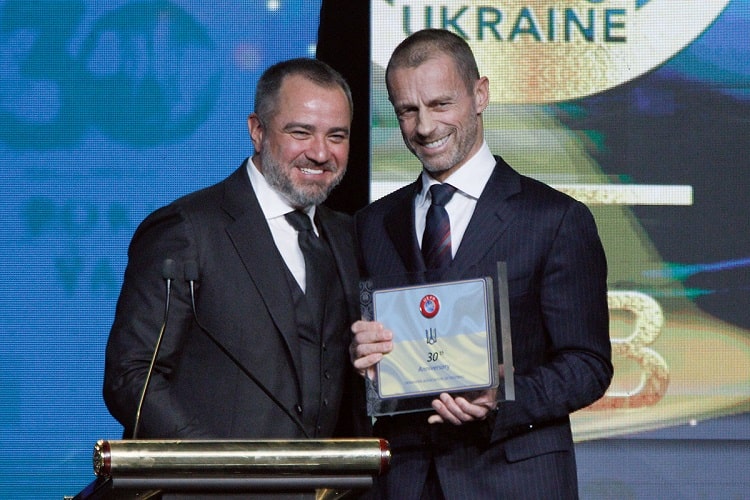 December 9 Ukrainian Football Association celebrated its 30th anniversary at the National Opera of Ukraine in the presence of the state leadership, the UEFA President, FIFA representatives and the leaders of European football associations.

UEFA official website published an article, dedicated to the celebration of the 30th anniversary of the UAF. It, in particular, states:

"One of the honorary guests of the celebrations on the occasion of the 30th anniversary of the UAF was UEFA President Alexander Cheferin.

"Looking back on these three decades of independence, you should be proud of what has been done," Mr Cheferin said in a speech at the gala event. - You have achieved what many would not have done in a hundred years. "

During his visit to Ukraine, the UEFA leader held talks with UAF President Andriy Pavelko and other representatives of the association, as well as met with Ukrainian President Volodymyr Zelensky, who thanked UEFA for its assistance in the development of football in the country.

Achievements of clubs and national teams

"Ukrainian clubs play an important role in the European football arena," said Alexander Cheferin. "They regularly take part in the most prestigious UEFA competitions." One of the significant successes of Ukrainian FC came in 2009, when Shakhtar Donetsk became the last UEFA Cup winner.

"It is impossible to imagine any big tournament without your blue and yellow uniform," said the UEFA president, "without many world-class players raised by Ukraine." Among the great Ukrainian footballers, the UEFA leader mentioned Andriy Shevchenko, Oleg Blokhin and Igor Belanov, winners of the Golden Ball in 2004, 1975 and 1986, respectively.

These events have become extremely important for the promotion and development of football in Ukraine.

The Ukrainian Football Association has a clear goal and aims to have a million people in the country by 2024. Strategic work focuses on infrastructure development, educational and management processes, promoting the game in different parts of Ukraine and supporting children's and women's football.

"I am especially proud that you have recognized the social aspect of our sport," said Mr. Cheferin. - The number of children who enjoy football in Ukraine is growing every year. It shows the vision, strength and commitment of the association to the true values ​​of football. "

"We are a strong team, we are an extremely ambitious national association in Europe and the world," Andriy Pavelko said at the ceremony. - It is important that we do everything together to attract millions of boys and girls to the game and a healthy lifestyle so that they can play their favorite game, and we can see how the future new owners of the Golden Ball grow in our country. .

UEFA funding for the Hat Trick program has helped the UAF improve its national football infrastructure. Focusing on the construction of full-size and small playgrounds with artificial turf, the association has provided access to all-season classes on quality playgrounds for a large number of people in Ukraine - and, most importantly, children and youth.

"You allow millions of children to make their dreams come true on the green," said Alexander Cheferin. "I thank you for this on behalf of UEFA and on my own behalf, and I wish you many more years of success."

At the recent UEFA Grow Awards 2021, the UAF won thanks to a project on the strategic development of football in the regions and increasing the number of players at the regional level. And recently, Ukraine announced its official interest in the tender for the final tournament of the European Women's Championship in 2025.

President of Ukraine Volodymyr Zelensky presented Alexander Cheferin with the Order of Prince Yaroslav the Wise IV degree - the highest award awarded by the state to representatives of other countries.

"This is a well-deserved assessment of many years of fruitful cooperation between UEFA and the Ukrainian football community," said Andriy Pavelko, who was present at the ceremony. The meeting also discussed the construction of a national training base for the national teams of Ukraine - a modern complex that will serve men's and women's national teams, as well as children's and youth teams.

President of Ukraine Volodymyr Zelenskyi noted that the country's authorities make sure that sports are attractive and accessible to every citizen. "We are doing and will do everything to make sports attractive to Ukrainians," he said.

"It is important for us that in every yard, in every city, people have the opportunity to play sports for free and at any time. Our programs are aimed at spreading an active lifestyle and creating a modern sports infrastructure, "the Head of State stressed.

A meeting with the participation of the main coach took place in the capital's Football House ...

In Ukraine, special funds are being formed, the task of which is to rebuild our ...