30 years of UAF. A solemn ceremony dedicated to the anniversary took place at the National Opera of Ukraine 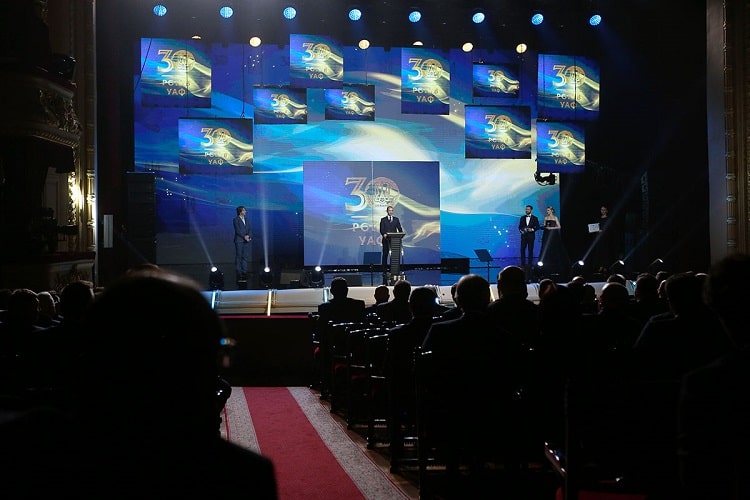 On the occasion of the 30th anniversary of the Ukrainian Association of Football, a solemn ceremony was held at the National Opera of Ukraine, which was attended by legends of national sports number one.

The event was attended by heads of state, UEFA delegation led by President Alexander Ceferin, who arrived in Ukraine at the invitation of UAF President Andrii Pavelko, FIFA representatives, heads of European football associations. 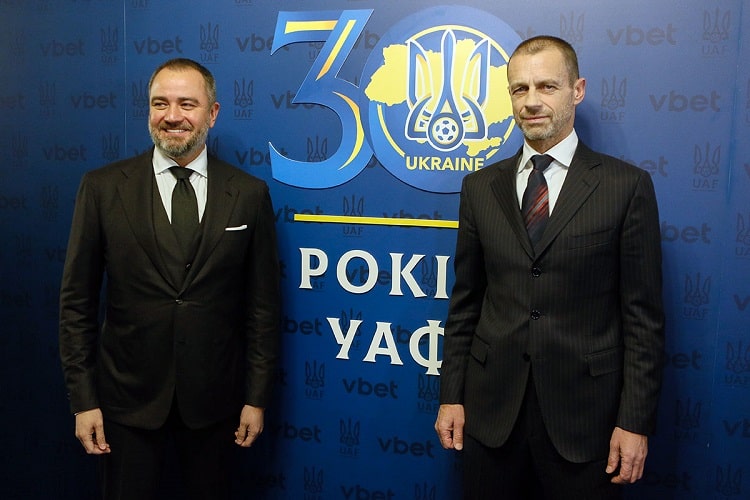 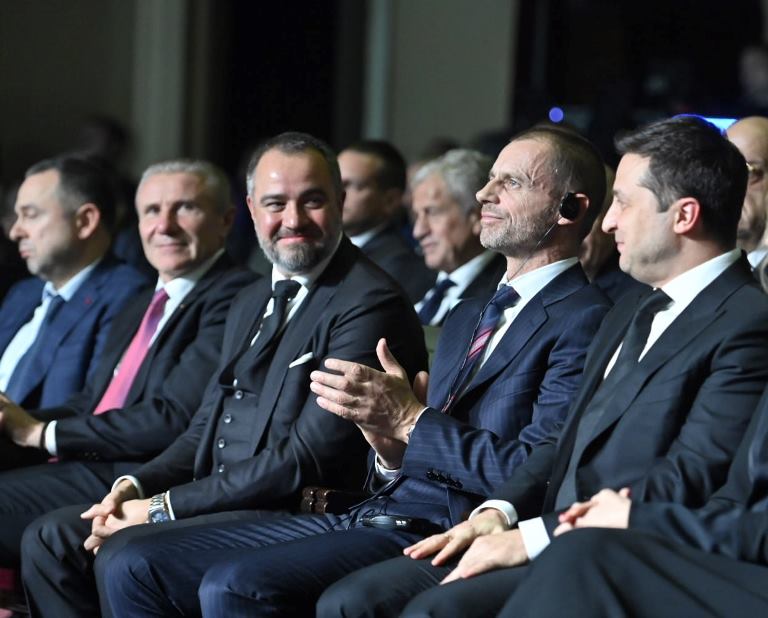 During the ceremony, the audience recalled the brightest moments in the history of Ukrainian football, noted the legends and those who wrote the football chronicle of independent Ukraine. The hosts of the event were Timur Miroshnichenko, Artem Gagarin and Vlada Sedan. The beginning of the ceremony was preceded by the performance of the National Anthem of Ukraine by singer Mykhailo Khoma.

The event began with speech by UEFA President Aleksander Ceferin, was also read congratulatory letter from FIFA President Gianni Infantino. They went on the wall with The solemn speech was given by the President of the UAF, a member of the UEFA Executive Committee Andrii Pavelko. The head of the Ukrainian Association of Football also received an honorary award from Aleksander Ceferin. 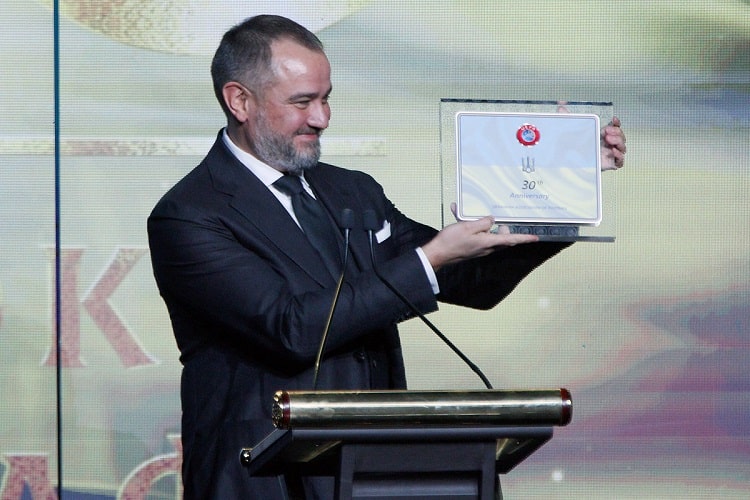 During the ceremony, the hosts mentioned the most significant moments in the history of Ukrainian football, in particular, the first match and the first goal of the national team. "It was a historic match, I realized later that my goal went down in history. It was a pleasure to become its author. There was an incredible excitement, the first game for the national team was inspiring, "said the author of the same debut goal of the blue and yellows Ivan Getsko. 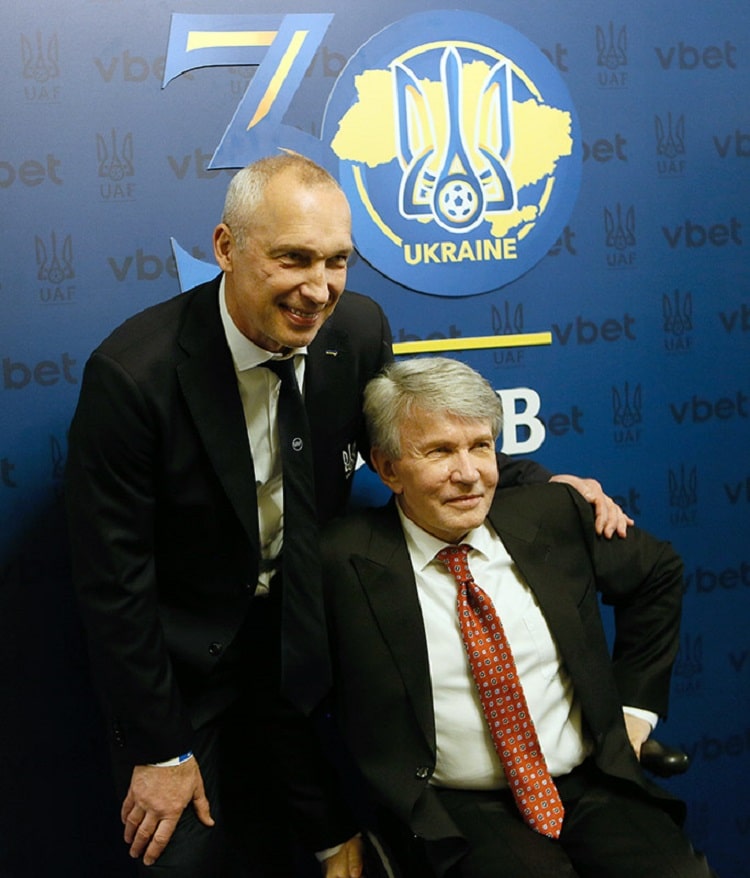 "I would like to thank everyone who greets us, who contributes their knowledge, skills and finances to the development of football. We want to have even more achievements in the future, "said Oleh Protasov, UAF's first vice-president, who actively participated in choosing the best goal.

The first steps of Ukrainian football, the start of the Ukrainian championship, the beginning of the performances of our clubs in the European Cups were not overlooked during the ceremony. Dynamo's path to the semifinals of the 1998/1999 Champions League, Dnipro's participation in the 2014/2015 final and, of course, Shakhtar's victory in the 2008/2009 UEFA Cup were mentioned separately. 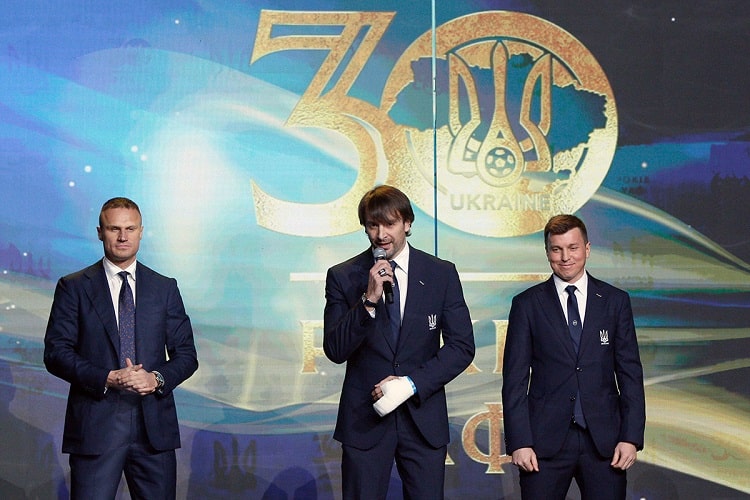 "These memories remain in our lives forever. And every time we watch the matches, it touches to such a depth that gets me feeling the goosebumps on my skin, "said the legendary player, and now - the assistant head coach of the national team of Ukraine Oleksandr Shovkovskyi.

Youth league championships, as well as tournaments in honor of outstanding players can be considered business cards of Ukrainian football. Working with young people is the key to the success of our youth teams. In particular, in 2006 the U-21 team won silver medals at the European Championships.

"It's hard to say now what was not enough to win. Apparently, a little luck, a little game. But when you have a victory, you have enough. I am very grateful to the team, coaches and players I had to work with. I want to congratulate us on this holiday. It is very nice to see people with whom I played, trained, work and will work in the future, "said Oleksii Mykhailychenko, the coach of the national team and now the UAF first vice-president and co-chairman of the UAF National Teams Committee. 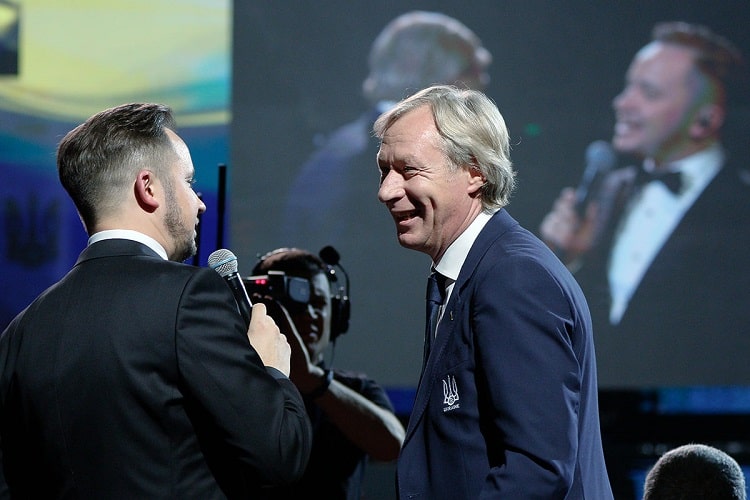 One of the most significant pages in the history of our football was the entry of the Ukrainian national team into the quarterfinals of the 2006 World Cup. The head coach of that team was the legendary Oleg Blokhin, winner of the Golden Ball -1975, now - co-chairman of the UAF Council for Strategic Development of Professional Football, co-chairman of the UAF Committee of National Teams. "When I said that the national team of Ukraine will go to the World Cup in first place, no one believed. But we made our way to the tournament, "Oleh Blokhin said.

"I want to thank the UEFA President, everyone who came to this holiday. And, of course, I would like to thank my friend, the owner of the Golden Ball Igor Belanov, thanks to him I came here. I want to thank the UAF President for inviting us to work in the Ukrainian Association of Football. He made a significant step by uniting three Golden Ball winners under the auspices of one organization", Blokhin added.

During the celebrations we remembered the legends of Ukrainian football who have already left us. Their photos appeared on the screen during piercing compositions performed by Italian opera singer Alessandro Safina. 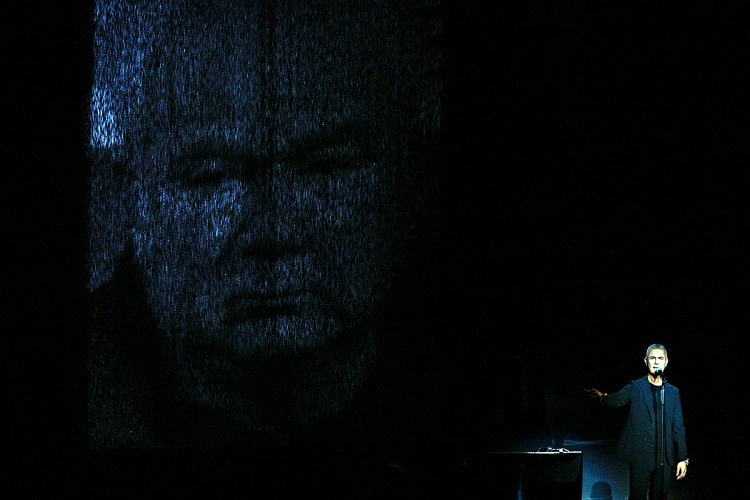 It was difficult to miss the success of youth teams. At the home Euro-2009, the matches of which were hosted by Mariupol and Donetsk, the national team of Ukraine U-19 under the leadership of Yuri Kalitvintsev won gold medals. As well as the U-20 team, which won a historic victory at the 2019 FIFA World Cup in Poland. During the ceremony, the head coach of that team Oleksandr Petrakov and its captain Valerii Bondar took the stage. "I want to congratulate everyone on 30th anniversary, wish them health, patience and good luck," said Oleksandr Petrakov, now the leader of the national team. 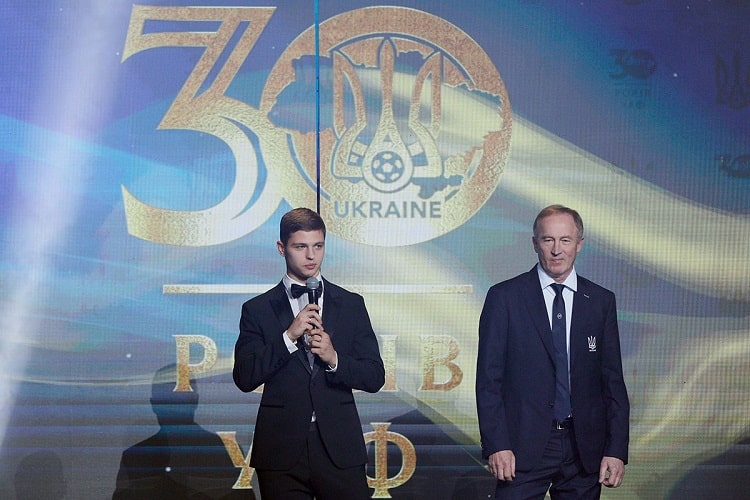 During the existence of the UAF, our country hosted major football events, including Euro 2012 and the 2018 Champions League finals. Special thanks were given to the Polish Football Union, which played an important role in holding the European Championship in the two countries. 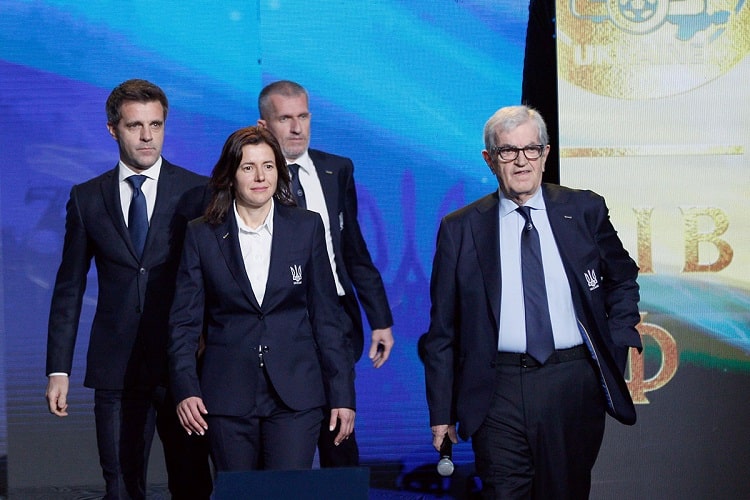 The development of football refereeing and compliance with the principles of Fair Play deserves special attention. Thus, in Ukraine, the chairman of UAF Referees Committee Luciano Luci, the chairman of UAF Ethics and Fair Play Committee Francesco Baranka, the recently appointed supervisor of Ukrainian refereeing system Nikola Rizzoli are actively working on this. The VAR system has been successfully implemented in domestic competitions, Ukrainian referees regularly receive international appointments, and one of the best referees in the world, Kateryna Monzul, deserves special credit.

"I want to congratulate everyone on 30th anniversary. Of these 30 years, I spent 11 in Ukraine. I can say that I love this country. During Andrii Pavelko's presidency, a lot of attention was paid to refereeing. Very rarely in my experience have I met a president for whom the refereeing team is as important as the national teams, "said Luciano Luci.

During the ceremony, the successes of domestic players and coaches abroad were recalled. One example of such success is Roman Grygorchuk, a specialist who has won championships in three different countries. The expert joined in the congratulations: “I am happy to be here, where a large number of incredibly deserving people have gathered, who have done a lot for the development of football. Many thanks to them. We also want the potential that Ukraine has to be realized, our national teams and clubs to achieve the best results. "

The winner of the 1986 Golden Ball, Igor Belanov, could not help but appear on stage, remembering the kind words of his friend Oleg Blokhin and paying tribute to the participants of the ceremony. "I'm standing on this stage - and feeling goosebumps. First of all, I would like to thank the leaders, in particular Andrii Pavelko, for continuing our lives. You remember the history, which is very important.

My Golden Ball, like Blokhin's, travels all over Ukraine. I would very much like our children to see that this is all real, and Belanov was also a simple boy who wanted to achieve something. I am glad that our children touch this trophy, take pictures with it.

I would like to address UEFA President Alexander Ceferin. Thank you for your respect and attitude to our country. I think that our youth will prove that our country is worthy of respect. I want to thank the guys sitting next to us, Valeriy Lobanovsky, who made me a person who has achieved something. I hug everyone tightly, "said Igor Belanov. 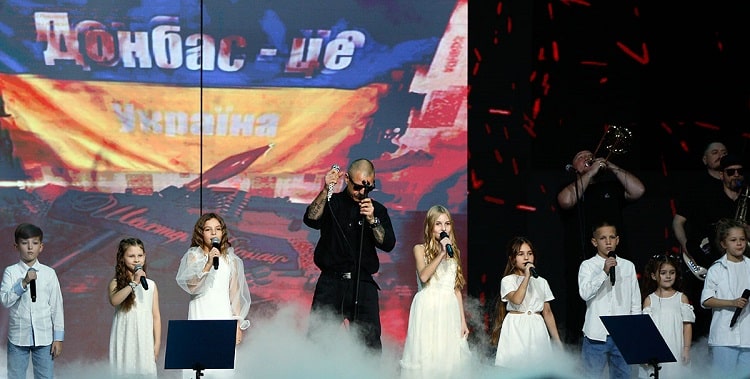 Defenders of Ukraine and football fans, whose contribution to the independence of our state is difficult to overestimate, received special attention. Holding events such as the ATO Heroes Cup and the Neskorenykh Cup is one example of honoring our courageous defenders.

Each of the regions of Ukraine has given our football many outstanding representatives. The development of sports number one at the regional level is one of the priorities of the UAF. Much attention is also paid to the football infrastructure, as evidenced by the relentless construction of fields across the country.

Players of the national team of Ukraine joined the celebration and recorded a separate video greeting to the 30th anniversary. Taras Stepanenko, who was present in the hall, noted that the guys, the coaching staff and the staff are doing everything possible to fulfill the goals and tasks facing them. "I want to wish us good luck and great victories in the future," said the midfielder. 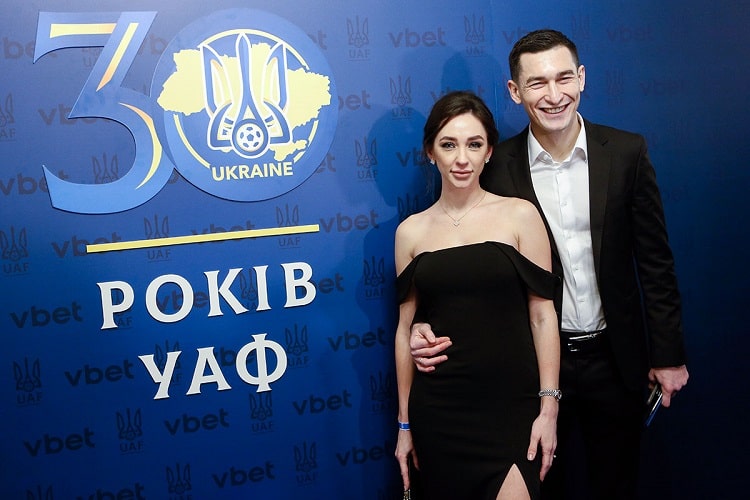 However, in addition to the main national team of Ukraine, other national teams can boast of achievements, of which more than 20 gathered under the auspices of the UAF. And the hosts of the evening had to spend a lot of time listing all their achievements.

In recent years, women's football has been actively developing. For example, the women's national team of Ukraine was recently led by the famous Spanish specialist Lluis Cortes, recognized as the best coach of 2021. "I want to congratulate Mr. Pavelko, Mr. Ceferin, all those who came, all representatives of federations and associations. I would definitely like the development of both Ukrainian football in general and women's football in particular, "Cortes said.

At the end of the ceremony, the President of Ukraine Volodymyr Zelenskyi made a welcoming speech. The Head of State announced the construction of the first in the history of our country training base of national teams in Knyazhychi, near Kyiv. 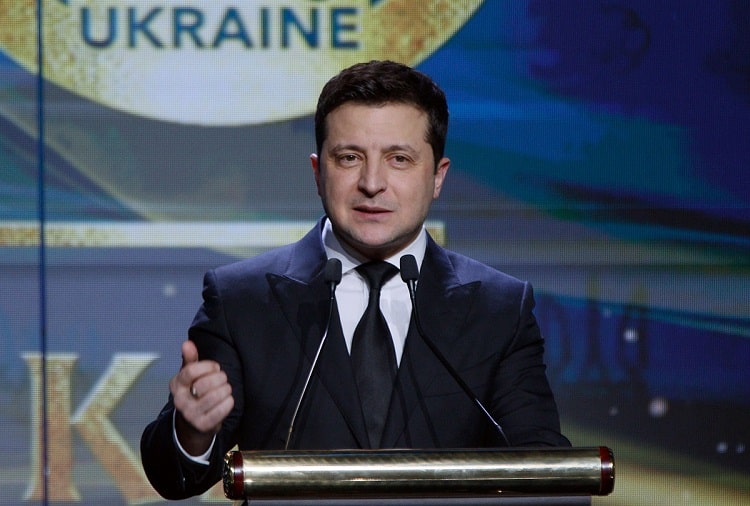 Finally, the participants of the event recalled Euro 2020, at which the national team of Ukraine on the initiative of Andrii Pavelko performed in a special form with the slogan "Glory to Ukraine! Glory to the heroes! ”, as well as a map of our state. The ceremony ended with the performance of the famous "Chervona Ruta" - a song that is the hallmark of Ukrainian fans.

Congratulations to servicemen and veterans of hostilities on the Day of Defenders of Ukraine!

On behalf of the President of the Ukrainian Football Association, a member of the UE Executive Committee ...

On the eve of the match Ukraine - Bosnia and Herzegovina in Lviv ...

On May 19 in the premises of the House of Cinema the next, V Report-election ...