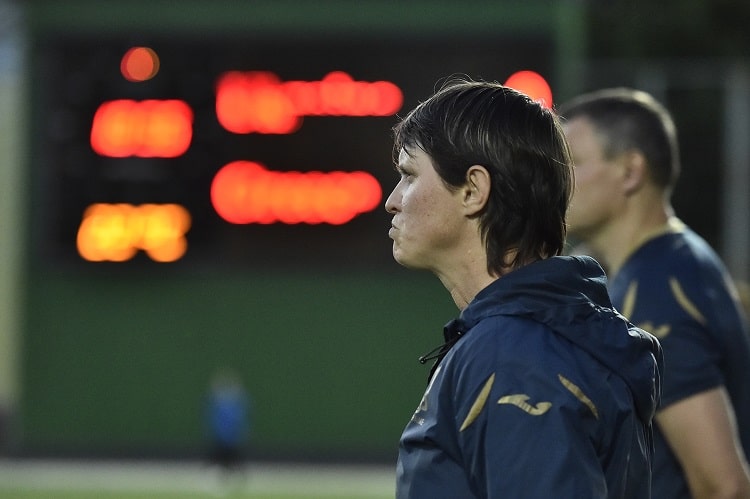 In the next qualifying match for Euro-2022, the women's national team of Ukraine defeated the guests from Ireland with a score of 1: 0. After the meeting, the head coach of the blue and yellows Natalia Zinchenko answered questions at a press conference.

- We understood that it would be difficult. The game was decisive - either we continue to fight for second place, or we lose our chances. I want to thank the girls for their character and dedication. The Irish put a lot of pressure, there were high throws, high speeds, we lost a little physically both in the air and below. But we survived and scored, even such a ball with the mistakes of the defender and the goalkeeper. But the result is on the scoreboard. Now the most important thing is to recover and move on.

— What were the replacements related to? in a break? Why did Anastasia Voronina spend only 25 minutes in the second half?

- Nastya can be understood, because she was immediately thrown into such a game… As you know, we lost two left defenders. Natia Pantsulaya took this position, coped with the task, but was injured. We were thinking who to release instead of her - Voronina came out. She has been training with the national team for only two days, and somewhere she didn't manage tactically, positionally. No problem, I understand her perfectly. We made a substitution in time, because attacks went through our left flank. Anna Petryk had enough for these 20 minutes. She recently recovered from an injury, but it was enough for the allotted time. Anna - an experienced fighter, brought the game to an end.

As for the replacement of Yana Kalinina, she did not play well. In Ireland, the defenders are very tall, powerful, and play well with their heads. It was difficult for her. Nadiya Kunina is more mobile and impudent. She also helped us and actually spent the whole second half alone in the pressure. It became a little easier for us, the rivals began to throw the ball behind us less.

— An away goal also decided the fate of the match in the away match against Ireland (2: 3). Can we say that fate has returned the debt to us in this way?

- I do not want to mention that fight. Then there was a completely different game. I believe that there is a football God who returns something. I consider that defeat an accident, because we at least played a draw. But it's football. The same is true today. We didn't have many moments, but they arose. We felt responsible for the position in the standings. Again, the situation with the girls who fell ill - had to rebuild everything. I believe that our girls work honestly and deserve this result.

— The national team of Ukraine played for the second time in a row. Was the defense ready for pressure from the Irish?

- The problem was only with the position of the left defender. We have played a line of defense, in which everyone knows the requirements that are set for them. But one person took off, and it became difficult for us. As a result, it led to a penalty, to many moments of rivals from the left flank. Thank God that others who closed the plane coped.

— We know the difficult situation in the national team the day before. Were you ready for the last minute rotation?

- So. Starting with the men's team, UPL teams… There are a lot of patients in Kharkiv, where Zhytlobud-1 and Zhytlobud-2 are based. We were ready, we did tests, we added players to the list so that we had a rotation.

Euro-2022. Today, the women's national team of Ukraine will play a decisive match of the group round of selection against the team of Montenegro